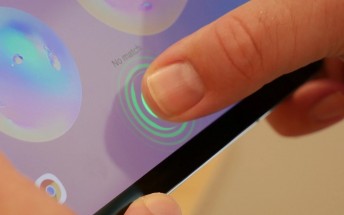 Samsung may not showcase the Galaxy Z Fold 2 at its August 5 Unpacked event after all, but there's still plenty of hardware that's expected to get official on that occasion. Alongside the two Note20 family members, the Galaxy Z Flip 5G, and perhaps the Galaxy Watch 3, we'll also reportedly see not one but two high-end tablets being launched, both called Galaxy Tab S7.

A press render of the S7 leaked less than 24 hours ago, and now comes new information about biometrics. There will be two sizes of the Tab S7, 11" and 12.4", just in case the resemblance to the iPad Pro line in looks wasn't enough to convince you who Samsung thinks these tablets' main competitors are.

The smaller 11" variation will apparently not have an in-display fingerprint scanner, instead opting to go with a capacitive solution mounted inside the power button on the side. The bigger 12.4" tablet, however, will support an optical in-display sensor, and it's unclear what the reason for this differentiation may be. It's also not known at the moment if the Tab S7+ will get an optical sensor (like most phones) or an ultrasonic one (like Samsung's flagship handsets).

Otherwise, the two sizes are expected to be pretty similar. They're powered by the newly announced Qualcomm Snapdragon 865+ chipset, with 5G and S Pen support baked in. The S7+ has a 10,090 mAh battery, while the S7 has to make do with a 7,700-7,800 mAh cell. The screens should be AMOLED, and the speakers "tuned by AKG". Neither model will have any water resistance, though.

That's the issue, peoples will be too stupid to choose the amazing 3D Sonic Max, because its predecessor was not that good on the beginning and even though it is now fixed and work quite well, peoples stupidly thing : Ultrasonic FPS = bad, even ...

I also don't understand. It feels like they're in a competition to make customers as angry as possible. Why don't they have a vote and see what people actually want.

Thank God! The whole point of having a pen is that you don't need to touch the display with your fingers. Note should have power button fingerprint reader as well.