Yesterday the 4-year Xiaomi Redmi 1S got MIUI 9 and now the Redmi Note, also from 2014, followed suit. Once again though, the latest Xiaomi user interface runs on top of Android KitKat and the security update is dated as far back as October 2016. 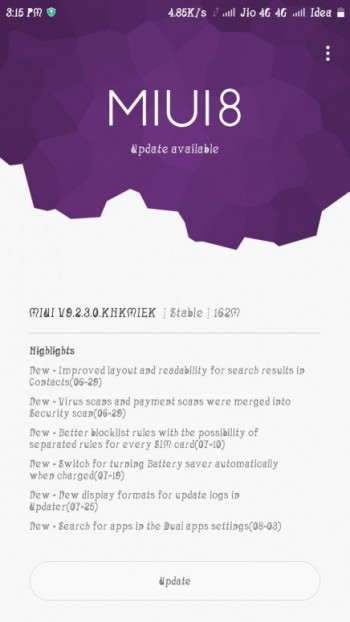 The version for the Redmi Note is MIUI 9.2.2.0.KHIMIEK, while it’s Prime variant receives MIUI 9.2.3.0.KHKMIEK, both with a size between 150 and 200 MB. The update is rolling out in phases and should arrive to all units by the end of the week.

With upgrading to MIUI 9, Redmi Note users will get UI design changes, new features like Search for apps in Dual apps, Picture-in-Picture mode thanks to the updated Mi Video app, Calendar Cards. There are also plenty of optimizations and bug fixes.

Xiaomi announced a list of 40 devices that will get MIUI 9. Some already have it, but some are yet to receive the update.

4-year old Xiaomi Redmi 1s gets MIUI 9, but with a catch

What is the date of the Android security patch level?

There are some MIUI 9 builts running Android 8. S3 was a flagship smartphone, Redmi series are budget ones, so I don't think they'll support split screen.

When is Redmi3S Prime getting MIUI9??