Apple has released its latest iOS adoption numbers, revealing that the version 10 of its mobile operating system now powers 60% of compatible devices. That's a rise of 6% compared to the last time these figures were released. 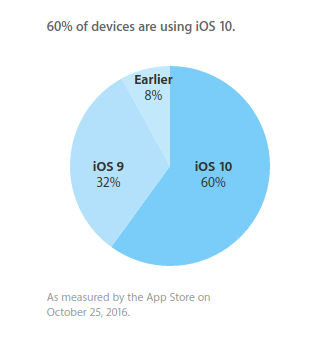 As for other versions, iOS 9's share currently stands at 32%, down from its share of 38% that was revealed a couple of weeks ago, while earlier iOS versions claim an 8% share, which remains unchanged. So it's clear that whatever share iOS 10 has gained is at the expense of iOS 9.

iOS 10 ruined my iPhone 5S camera & flashlight. Amongst the many bugs. Damn it

The fingerprint is quite a big issue on all Apple devices, but especially the 5S. I've seen my friends using 5S's give up on it completely, because it doesn't work at all anymore. They say "it's an old phone, it's normal" but I doubt it's just that, ...

ios 10 on my iPhone 5s has been cool but for two reasons.. the first being that my iPhone 5s lags a few seconds now compared to ios 9.3.5...then secondly, immediately my finger print stopped working. at a point I even had to downgrade back to ios 9....