Acer S59 gets benchmarked with 13 MP selfie camera in tow

Acer might not have unveiled any new smartphones in the past three months or so, but the Taiwanese company is definitely working on more such offerings for the future.

In fact, one of them just got benchmarked - by someone with access to a prototype, undoubtedly. And, as always, this means we get a neat list of the phone's most important specs. 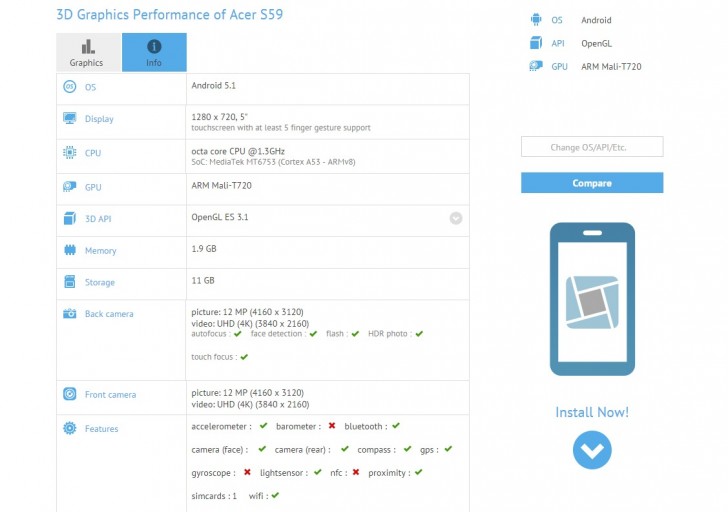 Clearly what stands out here is the Acer S59's front-facing camera. It will have 13 MP resolution, which means it will compete head-to-head with the units we've seen in the Asus Zenfone Selfie, the HTC Desire Eye, and the Micromax Canvas Selfie. All three of those sport the same resolution for their selfie snappers, but they also share another feature: a front-facing flash.

The Acer S59's benchmark doesn't reveal such a thing, but that doesn't mean it's not going to be in there in production units. Anyway, Acer will clearly label this one as a selfie lover's dream phone. It will also be very good for video selfies (if those even exist), since the front-facing camera will apparently be capable of 4K video recording.

Other specs aren't as exciting though. The S59 will have a 5-inch 720p touchscreen, MediaTek's MT6753 SoC on board (with a 1.3 GHz octa-core Cortex-A53 CPU), 2GB of RAM, 16GB of built-in storage, and a 13 MP rear camera with LED flash. The prototypes currently run Android 5.1 Lollipop, so there's no reason to think production versions will come with anything else.

It's still unclear when Acer will launch the S59, or what it will be called - since S59 is clearly either a codename or a model number.

Trendy features such as higher MP count on front cams