There is no denying that Microsoft has embarked on an ambitious, far-reaching roll-out mission with Windows 10 Mobile. Besides the ever-growing list of devices running the OS out-of-the-box, like the Lumia 950, 650 and 550, the US giant has also started releasing updates to an ever-growing range of older devices. 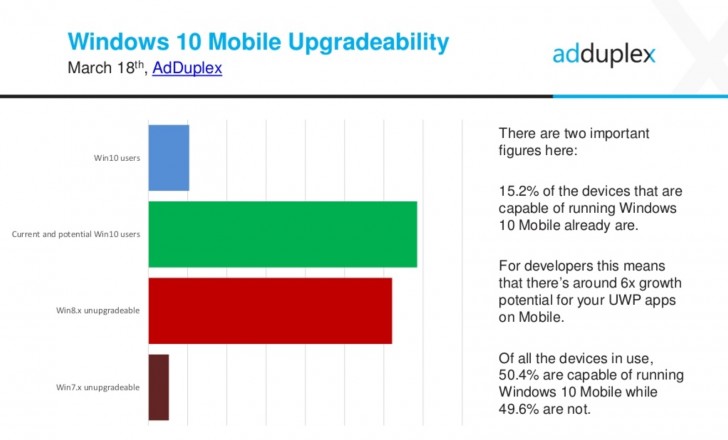 However, despite the growing number of devices, AdDuplex now says only 50.4% of all current Windows devices are capable of running Windows 10. 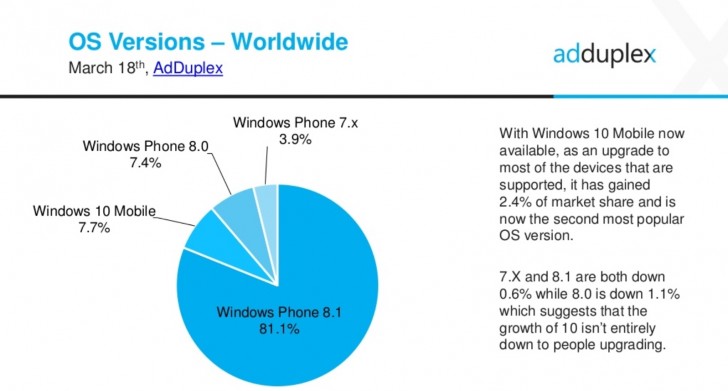 This means that developers willing to invest effort into Universal Apps can currently expect 50% market penetration on mobile, at best. This, however, in no way negates the allure of all the other Microsoft devices that run the the cross-platform applications. As for the remaining 49.6% of Windows phones, they are left with Windows Phone 8.1 or lower, at least considering Microsoft's current update requirements and plans.

Speaking of which, the whole 8GB storage, 1.5GB free, 1GB RAM and minimum 8.10.14219.341 build criteria are almost as vague and confusing as the various update compatibility lists that have been popping up from Microsoft as well as certain carriers. If you are wondering if your device can enjoy Windows 10, we suggest downloading the convenient Update Advisor app that does all the cross-referencing for you. 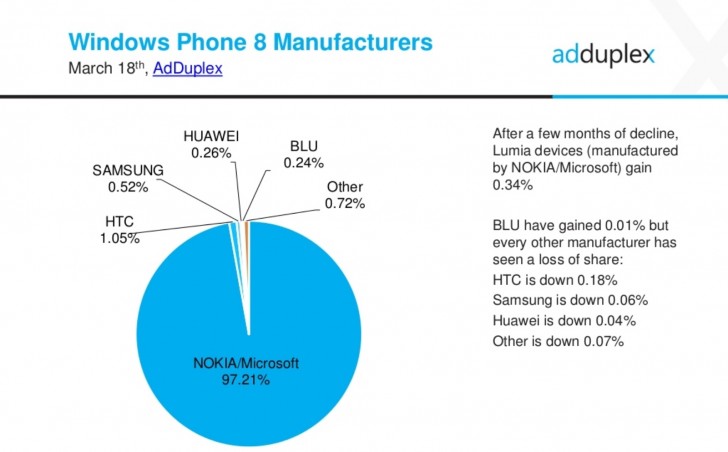 AdDuplex's new market report also provides some additional insight. For instance, Windows version distribution has changed a bit lately and Windows 10 has gained 2.4 percent points, making it the second most popular Windows on smartphones after Windows Phone 8.1, which still has a whopping lead of 81.1%. As for Windows device manufacturers, Microsoft/Nokia has actually increased its share by 0.34 percent points and now has a total of 97.21%. Most other manufacturers are loosing their shares quickly, but this might very well change if vendors continue to make progress on MediaTek support in Windows 10 for even cheaper devices. 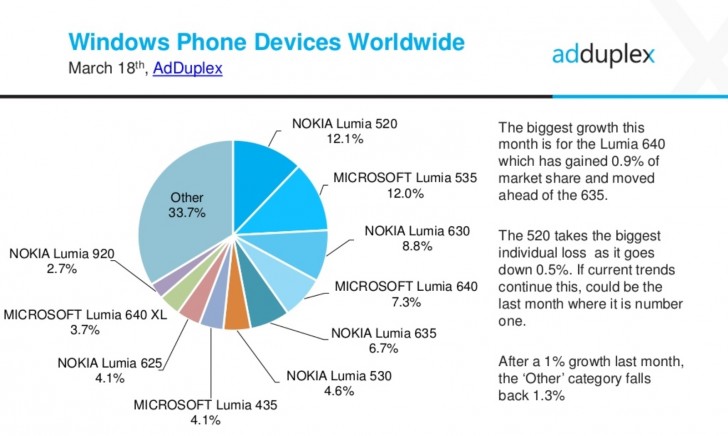 As for the most popular devices in use, AdDuplex has registered a big rise in interest towards the Lumia 640, which is now more popular than the Lumia 635. The Lumia 520, on the other hand, is quickly loosing popularity and is now down by 0.5pp.

Microsoft is creating confusion and depriving many WP users. My Lumia 1020 has 2 GB of RAM & 32 GB of internal storage but 'Update Advisor app' says my set is not eligible for getting Windows 10. But the set from Microsoft with 1 GB of RAM & ...

Mate, to be more precise, i was referring to my hope, like Microsoft, think, and will update those series of phones that are compatible with the new win 10, and nothing more, or less. As acted, lately, MICROSOFT it seems, as he understood, this.

So many devices have been left out...poor winsheeps now can't claim that Microsoft supports older models..-_-...btw even My L630 is not eligible for upgrade...and it's not even much older device...So next time ...i will prefer Motorola than the lying...