Over the years TCL has managed to adapt and carve out a pretty neat if not particularly interesting market niche for itself. At least as far as the alcatel brand goes. In an increasingly competitive and aggressive mobile market, TCL maintains a very flexible portfolio of affordable devices, often specifically tailor towards carriers as conveniently customizable on-contract offers.

This year does mark a slight breakaway from that formula at least on a conceptual level with the reveal of a few flexible display concepts and a proprietary hinge mechanism to back them up from TCL. But, even so, the core of alcatel's device strategy remains unchanged. Maintaining a relevant portfolio is no easy task, which mostly explains the tendency for new model releases in impressive numbers.

This year is no different with the introduction of the alcatel 1s, 3 and 3L smartphones, as well as the alcatel 3T tablet.

At the helm of the new lineup is the alcatel 3 - a device, which despite its name is different from the alcatel 3 from a year ago. Yeah, naming has never really been a strong suit or priority for alcatel. Anyway, the most apparent change for 2019 is definitely the display. Alcatel is calling it "Super Full View" mostly on account of the taller 19.5:9 aspect. It does still feature a small teardrop style notch, but with a 5.9-inch diagonal, it makes for an advertised 88% screen to body ratio. The latter part of that equation is a 151.1 x 69.7 x 7.99 mm, 149-gram plastic shell, available in either a Blue-purple or Black-blue gradient. 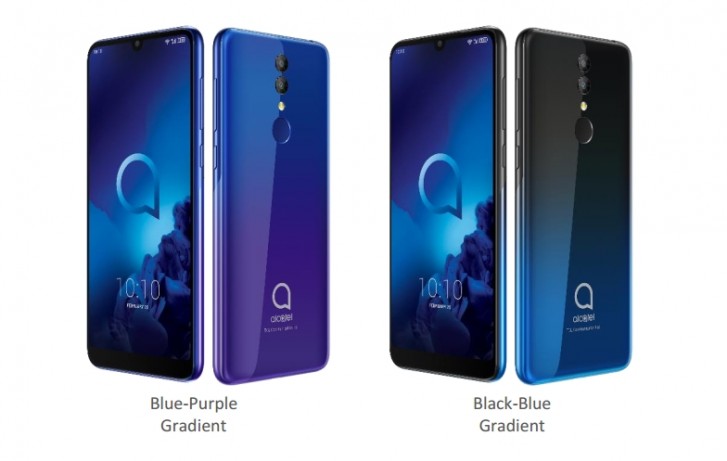 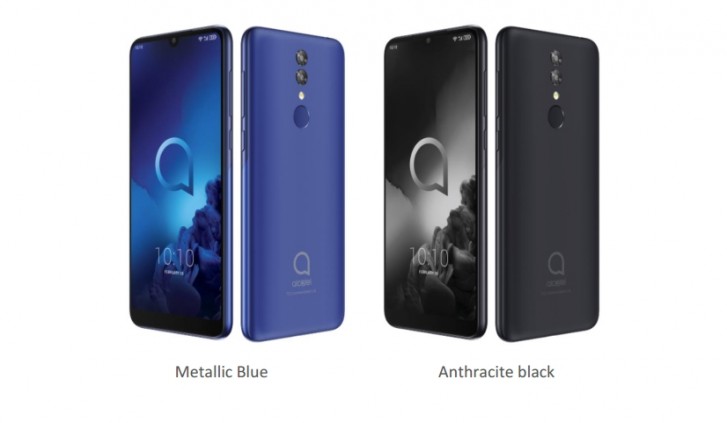 Other notable downgrades include a quad-core Snapdragon 429 chipset (12nm, 4xCortex-A52 @ 1.8GHz), coupled with 2GB of RAM and 16GB of expandable storage. Connectivity is pretty much identical between the two, except for NFC, which was cut from the 3L. The fingerprint reader might also be missing on certain markets.

Camera setup has been carried over in full, though on both sides - 13MP + 5MP on the back and 8MP for selfies. That also includes added features like bokeh and post-shot re-focus, as well as the AI scene detection.

The alcatel 3L will also be available in Q2 this year and will start at EUR 139.

The latest entry-level option from alcatel also features a plastic build, but is a bit more compact at 147.8 x 70.7 x 8.6 mm and tipping the scale at 146 grams. Within that body, TCL fitted a 5.5-inch, 720 x 1440 pixel IPS display, with a slightly less tall, but still perfectly trendy 18:9 aspect. No quoted protective glass, though. Battery capacity is a bit lower at 3,060 mAh. The finish on the unit is pretty comparable to the metallic one on the alcatel 3L, with Metallic Black, Metallic Blue, Rose and Gold as the dye options. 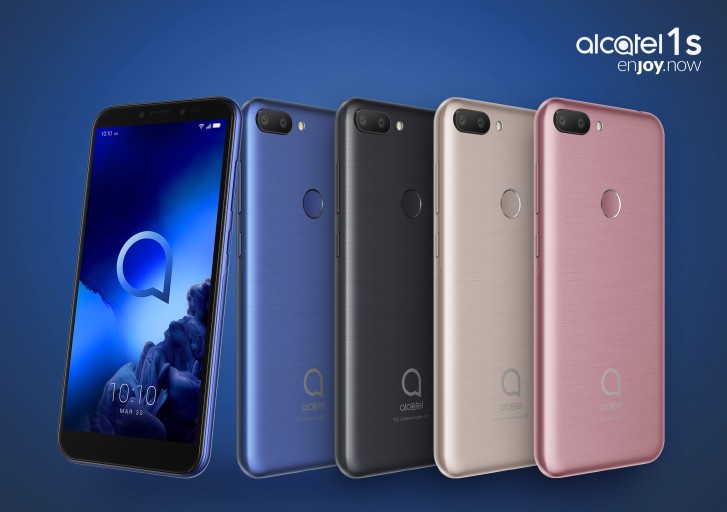 Inside the aclatel 1s is a Spreadtrum SC9863 chipset (8xCortex-A55 @ 1.6 GHz, per official spec) along with 3GB of RAM and 32GB of expandable storage. Not really an abundance of power, but still plenty to run Android 9 Pie out of the box - one better than 3 and 3L at launch. Plus, connectivity-wise the 1s comes pretty close to its siblings, rocking things like Wi-Fi b/g/n, Bluetooth 4.2, FM Radio. Even the back-mounted fingerprint reader is there. 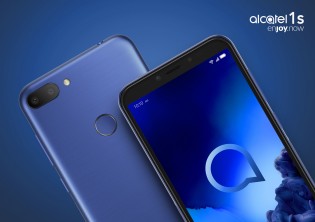 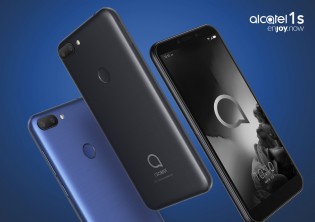 The alcatel 1s will be available in Q2 this year starting at EUR 109.

Finally, we have a rather interesting tablet offer. In keeping with the company's confusing naming scheme tradition, the "10" at the end of its model number stems from the 10-inch diagonal of the 800 x 1280 pixel IPS display. So that would probably mean "T" is for a tablet, as opposed to " V" and "X", which are already in use by alcatel phones. But we digress. 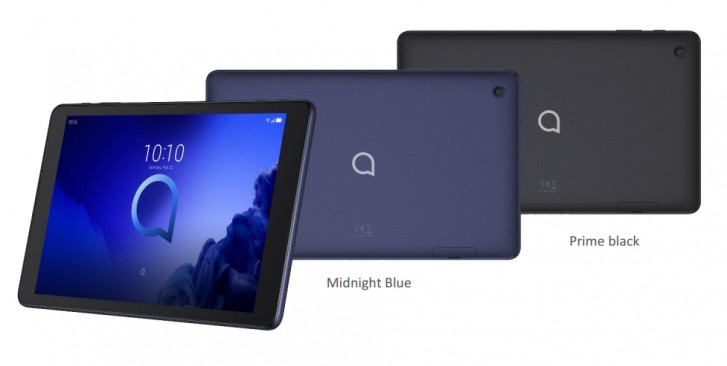 The alcatel 3T 10 actually looks pretty intriguing. Its body measures 260 x 156.6 x 8.95mm and tips the scale at 440 grams. For that, you get the aforementioned display, along with a 4,080 mAh battery. TCL didn't really deem it necessary to disclose the actual chipset inside the 3T 10, but it does apparently include a 4G modem, which you can make use of with a nanoSIM card. Memory is set at 2GB of RAM and 16GB of expandable storage. Other connectivity options include Wi-Fi b/g/n, a microUSB port and 3.5mm audio jack. 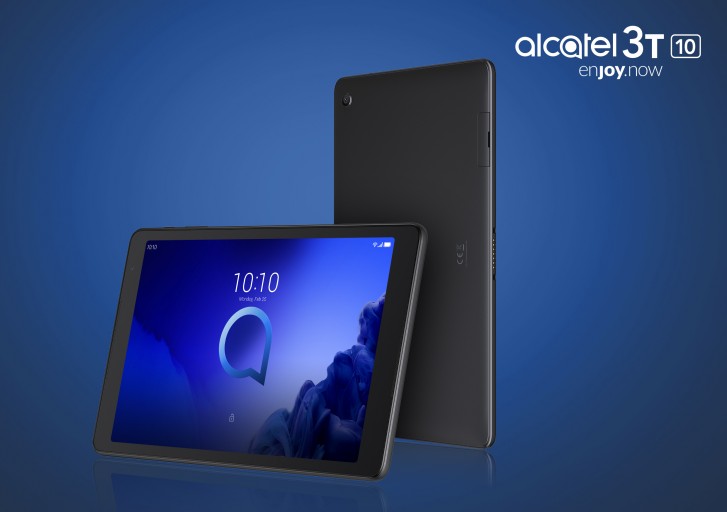 Speaking of audio though, you probably won't be using that 3.5mm jack too often since the 3T 10 is positioned as a loudspeaker device in more ways than one. First, it has two speakers and an AW8737 amplifier. Then there is DSP far-field voice recognition up to 3 meters. TCL is offering this as a home automation solution, powered by Google Assistant. 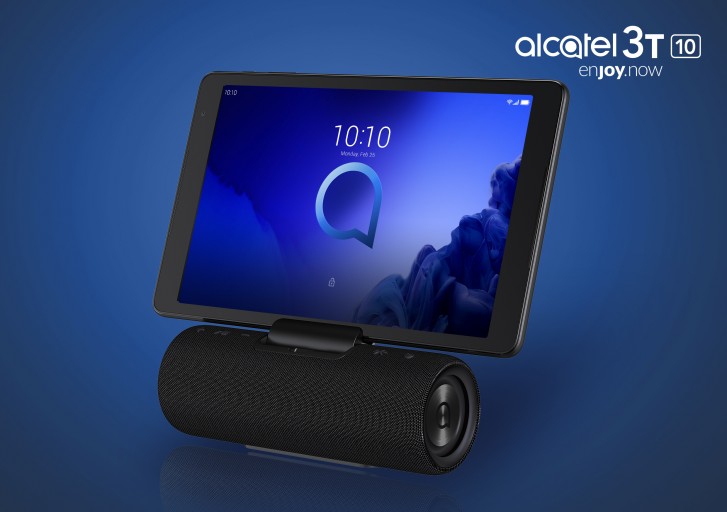 What makes it even more intriguing though is the optional SK8088G speaker/dock. The 3T simply slides on top of it and connects via a set of pogo pins on one side. Having done that, it can leverage a feature called Fast-Access Display and act as sort of a home automation and multimedia hub. Not unlike what Amazon has been doing with its Fire tablets and docks.

My 3 dashes below my screen for checking and switching between opened apps is no more working. Ant help in solving it. Thank you

How is this company still alive??