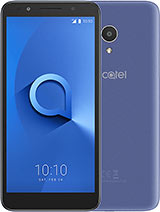 Pat A, 01 Feb 2021Even with the sound turned to max, I miss hearing it ring h... moreLike below said. You pay for what you get, it does nearly all a £900 phone does it's just alot slower, but for the price is a hell of a lot of phone.

Even with the sound turned to max, I miss hearing it ring half the time. It is also very hard to hear the person speaking to me. The sound is much worse than other phones.

Hey, it's a dirt cheap phone. You get what you pay for. It'll get done what needs to be done with no frills. Yes it's slow. Yes the camera is mediocre. Yes it's outdated. I bought two for my young kids as their first phone. It makes a good throw away learner phone or a backup.

Anonymous, 18 Apr 2020Honestly It's a horrible phone! Just after a month of using... moreWhy did you buy this cell phone? On whose recommendation and how much will you sell it now, since you say that mobile is dirty?

I've had this phone 8 months & the past 3 weeks it has been acting like it is possessed. I don't get indications that I have texts or voicemais then today it turned off while on the charger and has been unable to keep a charge to the battery. This is not cool at all!

Honestly It's a horrible phone! Just after a month of using it, it started to glitch out of apps and turn off randomly! I suggest not getting this phone!

How is baterry life on this device?

Worst phones on the Planet. Buy a big sledgehammer smash all Alcatel phone to smitherines!!! Many software problems...too many to list!! Phone turns on for Amber Alerts in the middle of night...jerky keyboard crap crap crap!!! Never again

Yay 1st comment, 17 Mar 2018I guess nobody wants a go phone? ....Can you also install n... moreSome apps will restrict themselves from installing on Go Edition phones.

For example, the WearOS companion smartphone app (required to setup a WearOS watch) is not even listed in the Play Store viewed on a Go Edition phone.

But in the general case, yes, the regular set of apps is available.

I would like to try the Alcatel 1x (2019) which has the Oreo 8.1 OS instead of the 'Go edition' which this one has. I managed to purchase a 'locked' (to Telstra) one in Harvey Norman for A$69.00, + A$50.00 (selected pre-pay, 28GB data, unlimited calls, SMS texts, for 42 days). So far, I have found it very economical with the battery, and 'tethers' 4G data with my computer WiFi very well, but that being mentioned, I do not stream HD video. As an entry level, it performs very well for the price and specifications.

This phone is so slow, I would throw it out of this planet!!! Go, or No Go Android, this phone sucks!!! The screen goes black even when starting Viber! Imagine using facebook, or instagram. Want a cheap and fast phone? Go for Blackview! I'm using Blackview A5 since 2016, and it is fast as lighning! I would recommend any of the newer models. They are worth!

Anonymous, 14 Dec 2018Not badI have the same 2 gb and 16 rom,the mobile is a beautiful. The touch screen is wonderful and, most importantly, good performance for Alcatel from this team on the mobile

Great Phone. It has a great 1GB ram. It does lag a bit, but only when hot. Great quality for $99AUD

bought this phone younger sibling alcatel 1 only rm 99 ~ 23 dollar in conjunction with 12.12 sale.This is the cheapest phone I ever buy and it is fully functioning smartphone.Of cos this phone feel very cheap especially at display and camera (no autofocus) but at this price its good.So if you intend to buy this phone at full retail price (rm 298~ 100 dollar) forget about it,its not worth it.If you got special offer like me defini

Too expensive for what you get. There are so many better options than this in the current market. There’s a reason why so many phones have at least 2gb now. Go or not, 1gb is not enough at all.

does it have OTG function ?..