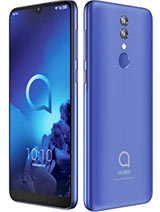 My Collapsed Menu Icon is not working. Any help in fixing it?

very bad phone,keeps on freezing and i only have two weeks with it,its not worth it

Rubbish phone, keeps telling me I have notifications when I don't, screen cuts out halfway through writing a text, it's got to be the worst phone I've ever brought!

gsmarenafunboy, 14 Jun 2019They just have to give up. 75% of the customers who has pro... moreI agree. Alcatel is good for 2 months after unpacking from the box. Then it's going downwards

gsmarenafunboy, 14 Jun 2019They just have to give up. 75% of the customers who has pro... moreBS. No such statistics exist, and it would be nonsensic and even impossible to try to gather such data as "75% of all people who have smartphone problems use X".

They just have to give up. 75% of the customers who has problem with the phone is alcatel user.

Alcatel cant just make a flagship phone to rival Samsung and Huawei. They don't have the capital or the brand name to make it worthwhile.

Alcatel, please make flagship phones that are par with other brands

Anonymous, 12 Apr 2019why there is no SAR value?Does that even matter comrade? :o

In comparison with the new Samsung A40, both have the same form factor and apparently target group. But Alcatel still uses HD(+) displays instead of FullHD+. The processor, memory, cameras and many many little details are of less quality here.
There is no price tag on the Alcatel 3L (2019), at least in Germany. But if you like this device, consider buying the A40 for not much more money. Everything is a bit better (the display is also AMOLED, huge advantage) and more future-proof: FullHD display. USB-C connector, WiFi 5 (ac), 4GB RAM, Octacore CPU etc.

why there is no SAR value?