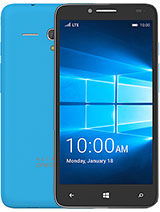 tc3, 21 Sep 2019Maybe I'm not highly demanding but this is still my everyda... moreAs an added bonus, I can save any app I want to my micro sd card. Unlike many android phones. Also with Microsoft maps, I can view any state map offline. the whole state. Download once and you're good to go (check for updates regularly). Seems much better than google maps.

Maybe I'm not highly demanding but this is still my everyday phone. Getting a bit slow though. I know, most people would say it was slow to begin with, but it still gets everything done and doesn't break when it gets dropped.

jackass1, 31 Jan 2019as far as every person on the planet knows, this device run... moreLol

clejons, 06 Dec 2018IT will not run legacy x86 apps. Will not allow .exe files... moreas far as every person on the planet knows, this device runs Windows 10 "MOBILE" version not the PC VERSION. It is only COMMON SENSE that this will not run .exe files HAHAHAHAHAH

IT will not run legacy x86 apps. Will not allow .exe files to run. Will only allow you to run programs from the high priced store. Calling this thing Windows 10 is a joke as far as I'm concerned.

I've been using this phone for several weeks and it's holding up very good knowing it has such a small Snapdragon processor. Recently I updated to the Windows 10 Mobile Fall Creators Update, Build Version 1709; OS Build 10.0.15254.1. I'm using a Samsung 128 GB sd card in it which makes the File Explorer load a little slow while strolling, but Groove Music along with the other media apps hold up suprisingly good! The screen feels a little sticky but has fairly good resolution. The camera resolution sucks along with it loading slow! But very nice phone otherwise!

G, 16 Sep 2017Don't get to excited, if you are using the Windows Insider ... moreThanks for the reply! I never ran Windows Insider but thought I might with this phone, but now I guess I won't. You said you might get another phone?.........make sure you keep it Windows!!!:)

#1 Windows Phone fan, 05 Sep 2017I'm getting a Alcatel Fierce XL in the next couple weeks f... moreDon't get to excited, if you are using the Windows Insider Program. My phone will only updates under Current branch. The fast or slow hasn't worked in four months. The overall phone is not bad, but I get the feeling that we will be buying another phone shortly.

I'm getting a Alcatel Fierce XL in the next couple weeks for $40
off of ebay. Right now I have a Samsung Ativ S Neo (Windows
Phone 8, updated to 8.1). The reason I'm getting this phone
is because it is a Windows 10 Mobile. I would've liked to get
a Microsoft Lumia 650 but the price was a little high. Anyway
I was watching YouTube videos of the Fierce XL and it seemed
everyone's biggest problem about Windows 10 Mobile is the
app gap! Personally I don't think it's that bad with my 8.1,
and my brother has a Microsoft Lumia 640 (Windows 10
Mobile) and he doesn't complain about it either!:) So if you're
looking into buying a Windows Phone and the app gap is what
you're worried about, go ahead and buy that Windows because
you'll always be able to find an app somewhere in the Store
that'll make up for the other app on iOS or Android!

quick reply, which of the slots are for the simcard slot?

Ryan, 03 Feb 2017I had a Lumia 640 and switched to this phone. I am a Window... moreNext year when a 2 year old phone will be dropped from support from Microsoft ,you will stop being a Windows fan.

I had a Lumia 640 and switched to this phone. I am a Windows Phone Fan. However, after a period of 6 months, I am going back to my Lumia 640. Personally the phone and the Apps are made for Lumia aka Microsoft Products. In addition to this : I purchased my Lumia as a AT&T phone, XDA shows how to Flash the Rom to T mobile. Suddenly I had a phone that works as it should on T mobile, It is a long process but well worth it. So if your a windows phone fan : Get Lumia or Microsoft based phones. The Apps DO NOT work correctly on other brands and limited. Even the Camera Apps both at 8 Mega pixel, the Lumia is Way above in quality and over all speed. I just wish I would have gotten a XL. However the 1520 for AT&T does not have LTE support for T mobile as the band is off and no wireless charging , NEW : you can turn on the T mobile Band for the Lumia 1520, Saving money to get me one!!! the super phone! No Phone to date has the specs of this phone!!! Check the Specs of the Lumia 1520, : Special info : there are 1520.1, 1520.2, 1520.3 versions. The .3 is for T Mobile. At&T Rom Version is 940 T mobile is 938. Have a Good Day Windows People!

Dearest all.With this price tag and specifications,very good for children to know what Microsoft Windows 10 is!!!Why!!!?An average income person worldwide must sell their house to buy one of those Microsoft $3000+ tablets !!!So,Alcatel (of China now!) has done a good job!!A Windows smartphone under $ 80 much lesser selling someone,s house!!!So,tasting Windows is fun too,while android dominance is above 95%/ of all smartphone products!!!Amazing!No!!!?Omid12Omidvar,....

Tale85, 14 Feb 2016The Fierce XL comes in both variants, Android and now Windo... moreI'm very happy with the Windows10 by T mobile along with Alcatel and I am so glad that they didn't do a big advertising campaign for the phone because that made it possible to send savings to the buyers Good Great Phone

I haven't found this set in stores in Europe yet, is it even available in Europe already?

Where can I buy it in Europe