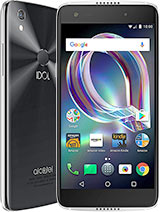 AnonD-693031, 29 Aug 2017For the record, this does have a FM radio chipThank you for posting about the FM chip, though I knew it had it from the descriptive, but I can’t find it. Do you or anybody know were to find it and what it looks like,thanks.

For the record, this does have a FM radio chip

Dilawar Hussain, 11 Jul 2017first company in the world which is introducing phone low s... moreXiaomi Redmi Note 4 and HTC X10 wants to talk with you...

This phone is probably marketed to people who would prefer a slightly smaller, lighter phone, reasonably quick, decent camera, very good speakers, starts out at least with up-to-date software (although Alcatel don't have a stellar record with updates, last year's 4s still being on Marshmallow). Still, people wouldn't buy it for that, nor for heavy gaming. I think it's roughly competitive with the Moto G line, but much more nicely finished. Personally, I would prefer this to the ZTE Axon 7 mini or the Nokia 6, which are in the same general price range.

Dilawar Hussain, 11 Jul 2017first company in the world which is introducing phone low s... moreIt's because they wont release idol 5 so they had to make compromise and make something between idol 4 and 4s.

first company in the world which is introducing phone low specifications phone than its predecessor.....
Alcatel stop fooling around people.

With 2620 mAh its like joke of a year.
Not even a funny to think about this phone.

AnonD-575146, 26 Mar 2017will there be the version of Windows againMost probably but as with the last version the new Windows version would also have better specifications than the Android version, there are rumours that Microsoft is switching to a 64-bit release on Windows 10 Mobile, the 64-bit version would support more than 4 GB RAM, so most probably the Idol 5S Windows would be released with the 64-bit release and would have 6 GB or 8 GB RAM with Snapdragon 835 processor on board.

What a tiny battery capacity among other specs... no way is this phone worth $280. The zte blade v8 pro and honor 6x both have better specs and more features for less money

will there be the version of Windows again

Myrddincat , 16 Feb 2017These are all unofficial speculations, while the Qhd displa... moreTo be fair their previous chipsets in the idol 3 and 4 series weren't that great either. (not that I'm hating on alcatel)

Junker12315, 14 Feb 2017I don't think it would cope with the QHD resolution at all.... moreThese are all unofficial speculations, while the Qhd display is probably correct, as they would not likely downgrade something as big as screen resolution and 4K probably isn't coming soon, things like the chipset are probably more up for debate as there are many more choices to be made.

AnonD-608429, 14 Feb 2017I have a question to ask, will the Helio p20 be enough powe... moreI don't think it would cope with the QHD resolution at all. The refresh rates of the screen are going to be low when using daydream and it will probably make you motion sick.
Remember the Helio P20 is even worse than the helio X25 and is almost as good as the X20 which is nearly a year old now and wasn't the best there was anyway.

I have a question to ask, will the Helio p20 be enough power for this phone to be Google daydream compatible?