The Alcatel POP4 lineup is certainly devoid of any excitement, but one thing nobody can complain about is a lack of choice. The newly announced POP 4 family includes the Alcatel POP4, POP4+, and POP4S.

In keeping with tradition, Alcatel took full advantage of the MWC venue for yet another year and made sure to update its POP family as well. This includes a total of three handsets with low to mid-range specs sheets.

First up, we have the POP 4. It comes with a 5-inch 720p, IPS display, housed inside a body, measuring 140.7 x 71.4 x 7.99 mm. Plastic, as expected, is the material of choice across the entire lineup, which is not necessarily a bad thing, especially when you intend on keeping costs low. Under the hood, we find a basic quad-core Qualcomm Snapdragon 210 SoC, along with 1GB of RAM and just 8GB of onboard storage, thankfully expandable with up to 32GB more. Other features include Cat.4 LTE and a 2500 mAh battery. The camera setup consists of an 8MP primary shooter and a 5MP front-facing one, with 84.4 degrees wide-angle lens.

Moving up in the food chain, we have the slightly upgraded POP 4+. Its display is 5.5 inches though the same resolution. Another change is the 1.5GB of RAM and 16GB of storage. The processor, camera, battery and everything else remains the same. 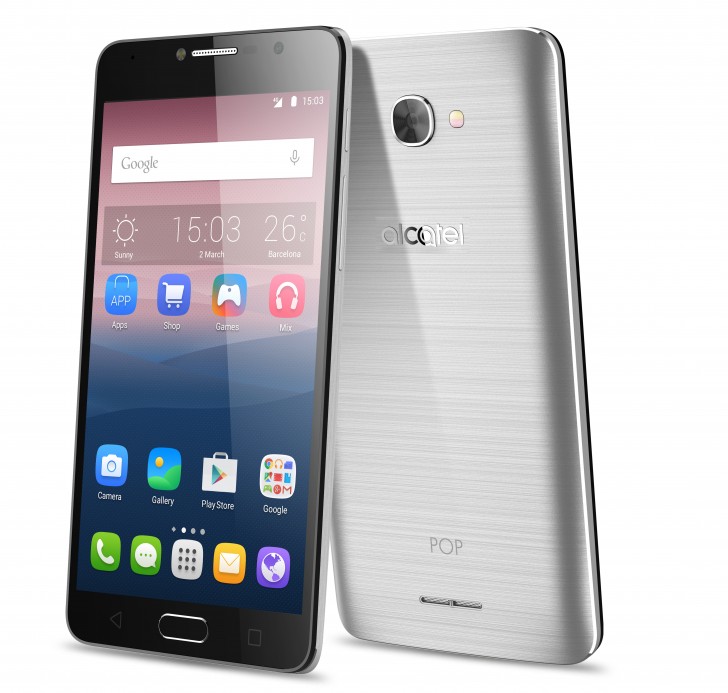 Last, we have the top offer in the face of the POP 4S. Its footprint is similar and understandably so, as it does have the same 5.5-inch display, only with FullHD resolution. RAM is set at 2GB, while storage stays the same at 16GB. The processor is also quite a bit more powerful - the MediaTek MT6755M. The camera setup is also improved with a 13MP shooter on the back and the same 5MP on the front, and the battery is rated at 2960 mAh.

A key aspect of the new POP 4 family is style and customizability. The new curved back design gives the handsets an extra touch of elegance and color plus pattern options are abundant: Hairline-Brushed, Leather, Wood and Baby Skin, to quote a few of the available covers.

Also, since Alcatel has a history of selling devices in bulk to carriers around the world, it won't surprise us to see even the specs sheet tweaked once retail units eventually start to hit shelves.

Make sure you check out our Alcatel POP4 hands-on from the MWC 2016.