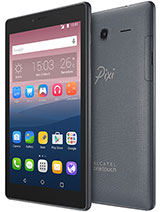 This is the worst tablet in the world! Its so slow. The space is so small that even without installing any aps can't take more than one movie without complaining for low storage. One bonus is very hard to break... tried to break my hand into his display and no luck... my hand hurt now. Dont waste money for this piece of junk.

Won this tab in a competition, it has decent performance overall (frozen all google apps with Titanium Backup), the only drawback is that it can't be updated to Android 7.0 at least. And there's no custom rom.

Rhymie, 29 May 2019I'm writing this from this tablet and it LAGS. LAGS LAGS AN... moreHey! I have Alcatel Pixi 4 7inch Tablet (Alcatel 9003X) and I used 5 years.Its now working too. This tablet is beatiful!

ted, 20 Sep 2016I have an alcatel Pixi No instructions no idea how to use i... moreCannot create more space by transferring apps to SD card.

Rhymie, 29 May 2019I'm writing this from this tablet and it LAGS. LAGS LAGS AN... moreDELETE AVG antivirus and install ESET .I found a trojan malware was installed while AVG was running found it by installing ESET . ALSO RUN TABLET In energy saving mode as it will run very fast NO LAGGING it also allows long battery time enjoy

I'm writing this from this tablet and it LAGS. LAGS LAGS AND LAGS. When I'm writing this and the keyboard LAGS. In 2016 the tablet was bad. But in 2019 it's even worse! When I started to use this tablet, it was not bad. I loved it. But after 6-7 months it started to lag. Uninstalling updates of Google services helped me for another month. Then again. NEVER BUY THIS TABLET IN 2019!!!!!!!!!!!

Ok so I have this phone and it SUCKS. I had Alcatel One Touch before and it was the worst thing I ever had. I'm literally crying while using this stupid piece of crap. I can't even call someone on this phone. The touch screen isn't working and I'm crying because of the updates, which doesn't do anything except for taking storage space. Just why would anyone made such a crappy phone like this? It's even worse than Samsung. I hope I'll get a new phone soon-- and I hope it won't be this piece of shit again.

When I bought this tablet it was very good and fast, but now after a year of using it I started to have problems with the hardware, the mic has a very low voice people can bearly hear me when I talk, the touch screen has a 3 cm dead strip from the top and the back camera is not working any more but before it stopped working it used to show transparent spots.
When I bought this tablet I used to recommend it for my friend's but now I don't recommend anybody to buy it.

very slow this device and it hang most of time

Bro Mujay, 03 Feb 2018I can't open it,,it keeps telling me to connect to a wifi t... moreUnable to skip after Factory Reset due to Google locked. You will need to enter your previous logged google account.

Very Slow Tablet.. some time need to restart it.
No need to buy even in cheap offer....

@David thavarajan - please note we discuss Alcatel Pixi 4 tablet here, a tablet with 7" screen and no phone functions. If you have issues with Pixi 4 phone, that is another device and you should write your comments here:
https://www.gsmarena.com/alcatel_pixi_4_(5)-8157.php
(or even in another location if your phone model is not the same as above)

I bought this on 8 the December 2017.everything is very slow n I m disgusted with the performance. Dealer don't want take back.I was conned into buying this phone .can u take back n give me back my money

Nico, 14 Sep 2017NoI can't open it,,it keeps telling me to connect to a wifi to before "skip" option

i need official firmware of 8063 wifi only model.where i can get it ? please anyone upload the stock rom & share the link.

I own the Vodafone version of this device (VFD 1100) and it's suprising. For the price it does a lot of things well, if you remember to not bog it down with a ton of applications (it ONLY has 1GB of RAM, and marshmallow uses well over 300mb by itself with no Google services running). I had to root it to uninstall some applications that I found dubious and to install the modifications that I need, and after that it became a lot better in terms of usability and functionality. Just keep your expectations where they should be and you'll be fine. This is a budget device afterall, so that is highly required.