Alleged live photo of the unannounced Meizu MX Supreme made the rounds on the Chinese social network Weibo. The previously rumored smartphone is reportedly developed in collaboration with Nokia. 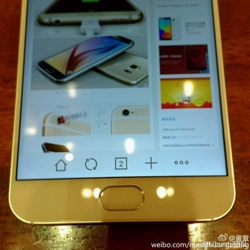 The image gives us a peak at the area below the display of the smartphone. Meizu MX Supreme packs an oval home button that is likely to carry a fingerprint sensor, and ultra-thin screen bezels.

It is worth noting that the home button of the leaked smartphone is different that the on found in Meizu MX4 Pro. The latter has a squarish solution instead.

There is no word on the specs of the Meizu MX Supreme for the time being. We’ll keep an eye out for more details on the handset going forward.

Ok, let's try and clear that up. - A no bezel phone is a major problem to integrity. The phone will will be more prone to screen cracks and bending. - A camera under the screen is not possible for phones with capacitive keys or front spea...

Frera under the screen? that's madness