Purported press renders of the unannounced Moto G (2015) made the rounds online. The successor of Motorola Moto G (2014) is expected to make its official debut in the near future. 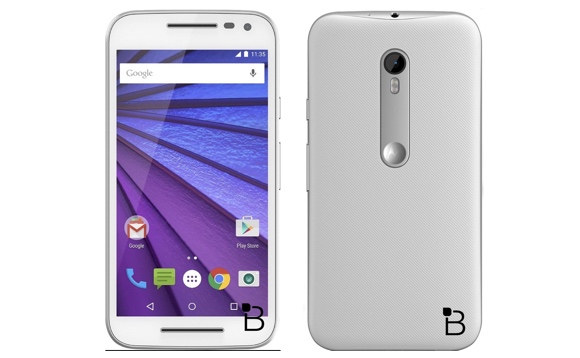 The images showcase the device in a white color scheme. The fall right in line with the recently leaked live photos and video of the unannounced mid-range smartphone.

Codenamed Osprey, Moto G (2015) will debut with the model number XT1540. Its rumored specs include a Qualcomm Snapdragon 410 SoC, 1GB of RAM, 8GB of expandable memory, 5” 720p display, and 13MP camera. The device will debut with Android 5.1.1 Lollipop on board.

I am expectin new moto g with 610 sd atleast and 2 gb ram.. otherwise it'll not so grt improvement to its previous version 2014. Motorola should think of this public view in general..