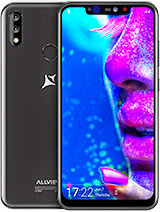 Anonymous, 17 Oct 2019Actually, it's BLU. This particular model is the Blu Xi+ or... moreActually, it used to be Gionee for both BLu and Allview; Gionee went bankrupt so now they work with Archos (much better phones IMO)

ike, 30 Apr 2019Allview is not a phone producer, they just rebrand. Gionee ... moreActually, it's BLU. This particular model is the Blu Xi+ or something like that.

Allview is not a phone producer, they just rebrand. Gionee is they supplier. The quality of the phones is poor and no firmware updates.

I wait to Allview appear on GSMArena because is from my contry, Romania, in Europe

After 1 month of using it I can say that battery life is awful, last as my ex Moto G4 after 2 years, max 24 hours. Camera lose focus if the object is under 5cm from the phone. USB connector (in phone) seems very fragile.

where can i get the software please help me

this is one heavy phone with one tiny battery. What's causing the extreme mass then?

Anonymous, 26 Jun 2018Snapdragon 630 on X4 hasn't the same power... It uses only... moreNWM fingerprint scanner is enough for me i dont need a face ID.
I am look different every morning and evening and i dont believe the phone will recognize me.
I am simmilar to the bats. Living at night rest at day :-)

CherryPie., 24 Jun 2018Waiting for Xiaomi mi 8 se actually. Check it. Has 10nm bra... moreWell i am satisfied with my new phone.
I am changing phones when they stop working or like every 3 years.
Had Lenovo Vibeshot before and gave it to friend because his many years old Samsung Galaxy young stopped from working.
Because i always use a book case and a glass screen protector the phone was like a brand new. Even after 3 years. Only i replaced was the battery.

aKa Condor Allure M3 in Algeria

CptPower, 24 Jun 2018Well same. Having Moto X4 and can be bought for simmilar ... moreWaiting for Xiaomi mi 8 se actually. Check it. Has 10nm brand new soc from qualcom sd710 and will cost less with 4gb ram 64gb storage

[deleted post]Well same.
Having Moto X4 and can be bought for simmilar or even lower price.
Here in Slovakia is possible to get Moto X4 for 270 euros brand new.

CherryPie., 23 Jun 2018Redmi note 5 plus has worse chipset, worse camera, worse gp... moreI was mean Redmi Note 5A prime or Y1.
And yes its a bit worse but still offers same space ram and bigger battery for just 140 euros where this thing cost much over 300 and for that price it havent nothing much better.