The Amazfit GTS 3, GTR 3 and GTR 3 Pro got a big new firmware update which adds smart reply to notifications, the ability to reject calls via text message as well as several other optimizations. Amazfit GTS 3 gets firmware version 7.42.5.1 while GTR 3 Pro is treated to version 8.37.3.2 in the US, Italy, India, the UK, Vietnam, with more regions being added soon. 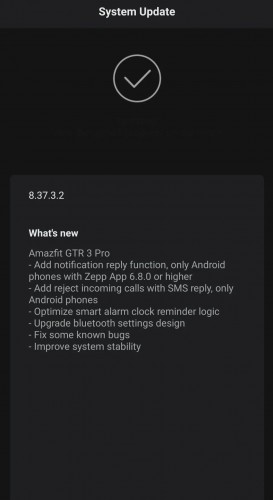 GTR 3 Pro gets the added benefit of custom replies to notifications via the Zepp app on Android. Other improvements across the GT 3 range include optimized smart alarm clock reminders, Bluetooth connectivity and overall system stability. In addition to updating your watch firmware users should also make sure they are running the latest Zepp app on their phones.

You think that tjey will work to trlease a new bersion on OS to make fast reply a reality?

The OS is completly diferent. Dont expect any of these updates

Too big size and too expensive. If they chose only one size for all,it must have been a 1.35" display. amazfit failed this time