Amazfit unveiled the 2nd generation of its round and rectangular smart watches in September last year, so their replacements are overdue. The waiting is over with the unveiling of three new models – three, because there is a Pro model this year.

While the three watches share their core features, each has different strengths. One is the premium option, the other is the battery champ, the third one is thin and light. Let’s start with the newcomer, which is also the most advanced of the three.

The round chassis of the Amazfit GTR 3 Pro is made out of aircraft-grade aluminum alloy and weighs only 32g. It is capped with a curved glass. There are two versions – Brown Leather (referring to the strap) with a light gray body and Infinite Black with a dark gray body and a black fluoroelastomer strap. 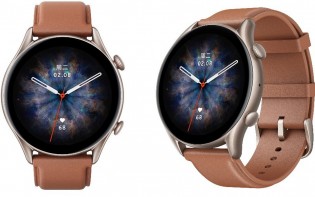 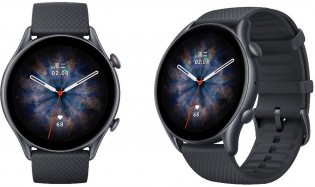 You can pick from over 150 watch faces and each face has a matching Always On Display version, which is simplified to reduce power usage. Some watch faces are editable, that is you can choose what widgets they display (heart rate, steps, weather, etc.).

The watch has two buttons, though the top one is actually a crown. You can use it to scroll through menus and longer notifications. 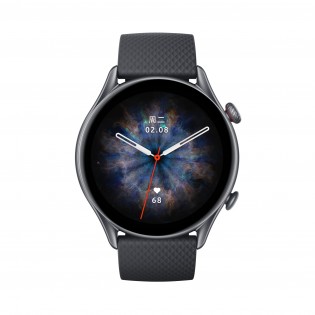 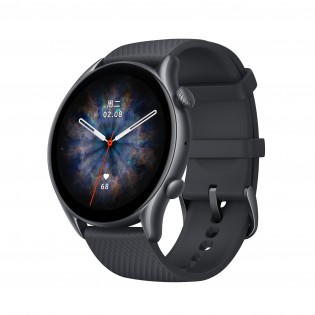 A larger 1.45" display capable of 1,000 nits of brightness • One crown for scrolling and an additional button

With this generation of watches Amazfit is introducing Zepp OS, which features a revamped user interface. It’s not quite as powerful as Wear OS, but it does support third-party apps, which work on an app framework designed to reduce power usage. One of the 10 or so apps that already exist integrates with Home Connect, which is a cross-brand tool for controlling smart home gadgets.

The company is in the process of creating a web-based app development kit, which will allow everyone to create their own watch faces and even apps (with tutorials to guide you through the process). These will be easy to share too, so you can share your creations with others and enjoy theirs too.

The watch can sync the health data that it tracks with Apple Health and Google Fit. It also works with popular apps like Strava, Relive, RunKeeper and others. Support for some of these will not be available at launch but instead will be added in the near future.

As for the health features being tracked, the watch offers 24/7 heart rate and blood oxygen (SpO2) tracking. Measuring the blood oxygen level takes only 15s, almost half the time that second gen watches needed. Sleep tracking monitors the different stages of sleep and can even detect naps during the day. You can also enable an option that will track your breathing while you sleep.

The GTR 3 Pro can track your heart rate in pool, your sleep and outdoor exercise

The Amazfit GTR 3 Pro offers over 150 sports modes. It is 5 ATM water resistant, so you can take it swimming and for the first time it is even able to track your heart rate while in the pool.

The Pro model supports satellite positioning based on the 5 major constellations, which increases the position lock time by 20% and increases accuracy by 40%. The watch can track VO2 Max, pace compared to previous runs, full recovery time and more.

The watch has a microphone and a speaker built-in, which allows you to answer calls. But you can also talk to Amazon’s Alexa as well as an offline assistant (which accepts commands in English, Spanish and German with no Internet connection).

While the watch itself lacks an Internet connection (it relies on your phone for that), there are 2.3 GB of internal storage, so you can load in some music or podcasts to listen to while exercising outside.

Battery life is 12 days with normal usage, half that if you push the phone. The watch can last 35 hours of continuous GPS tracking. You can use Battery Saver Mode to stretch the time between charges to a full month.

The Amazfit GTR 3 shares the aluminum body design of the Pro model, though the display is slightly smaller at 1.39”. It has a similar pixel density for a sharp image and can hit those impressive 1,000 nits of brightness. The slightly thicker bezel means that the screen-to-body ratio is 66%, however. 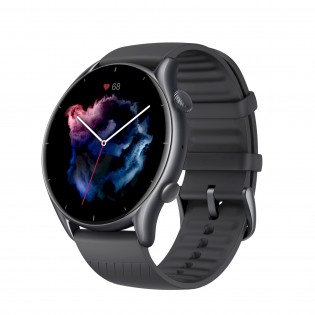 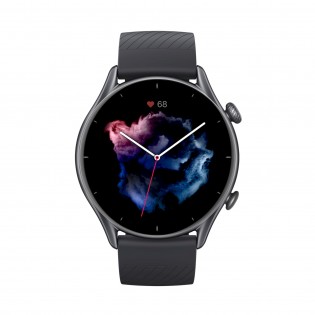 The watch is available in Thunder Black and Moonlight Grey, both with silicone straps. This one has 100+ watch faces to choose from to customize the look, all with an Always On Display mode version.

The vanilla GTR 3 is more than just a cheaper version of the Pro. It has better battery life, lasting up to 21 days of typical usage (a week longer than the GTR 2) or 10 days of heavy use (or up to 35 days with Battery Saver mode). The watch also has a GPS receiver and can go on for 35 hours straight on a charge.

The GTS series offers a rectangular screen that is more conductive to reading notifications and using the watch apps than round screens. This model gets a larger screen too – from 1.65” to 1.75”. At 341 ppi pixel density and 72.4% StB ratio, this display is the sharpest, largest and most space efficient in the 3rd generation. It also offers 1,000 nits of peak brightness and Always On Display mode like the other two. 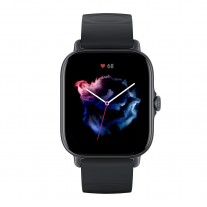 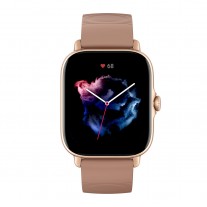 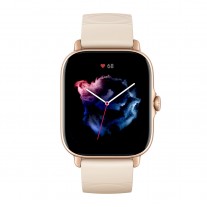 The Amazfit GTS 3 has the largest (1.75") and sharpest display of the 3rd generation

The Amazfit GTS 3 is available in Graphite Black, Terra Rosa and Ivory White. The watch is super light at just 24.4g and is pretty thin too, 8.8 mm (not counting the heart rate sensor bump).

However, the battery life only matches the GTR 3 Pro at 12 days of typical and 6 days of heavy usage, 24 days with Battery Saver. Continuous GPS tracking will deplete the battery in 20 hours. That’s still a lot better than the GTS 2, which typically lasted 7 days.

Note that the vanilla GTR 3 and the GTS 3 lack a loudspeaker, so they can’t handle voice calls. Also, there is no built-in music storage for those two.

Man you have your point but for me watches was always burden. I dislike to have anything which makes me feel unconfortable i.e. not my self. For that case phone in the pockets is better. Besides i wear glasses from before age i learned to wa...

Well, you might be right, but a 5 bucks watch won't let you check out missing notifications/ messages/ call. You might as well tell me that, to check those, simply take out your phone from your pocket and do so. And you got a point, but when you...

Man people interested in sport activities use them. Which means young people of age 18-30 maybe up to 40 thats it. Anyone aobove 40 gives up on sport activities and needs to see date and time for that case phone does its job very well. And even...