Update: The event is over now and the Amazon Fire Phone is official. Check out our full scoop.

In just a few short hours, Amazon will hold an event during which it's widely believed to be presenting its first smartphone. The image below is apparently a true to life rendering of it. 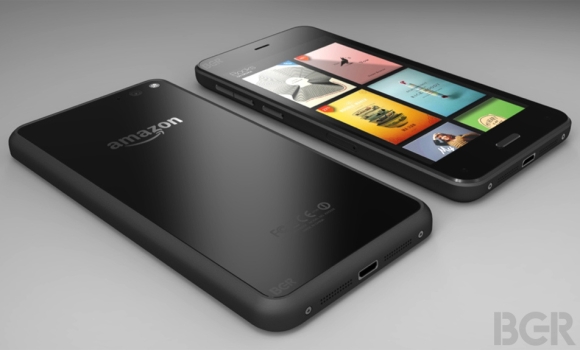 This device has basically been rumored ever since the first Kindle Fire tablet became official. After all, it does seem pretty logical for Amazon to want to go into smartphones now that it has a pretty strong foothold in the tablet space.

The Amazon phone will reportedly come with a unique 3D-like interface, that won't require glasses for viewing. This will be enabled by four cameras mounted on the front corners of the handset. They will be used to track your eyes and continuously adapt the image you see based on your position in relation to the screen.

And that may be exactly what the following teaser video from Amazon is about.

This system will make certain tilt gestures possible, and those may be used to control some aspects of Amazon's built-in apps.

The OS will be similar to what's inside Amazon's Kindle Fire tablets, unsurprisingly, so expect a forked version of Android in this case too.

Obviously, Amazon's services are going to be front and center. And given what it's done with its tablets, the retailer's first smartphone may be sold at an extremely low price - at cost almost. That's because Amazon wants to make money by selling you stuff after you buy one of its devices.

As for specs, a 4.7-inch 720p touchscreen could be in there, while a Qualcomm Snapdragon chipset with a quad-core CPU along with 2GB of RAM should handle the heavy lifting.

According to the latest leak on the matter, the Amazon phone will be an AT&T exclusive. It's unclear whether that will help the new device or hurt it, especially nowadays when people are used to having the best smartphones available on all carriers. Then again, this may be a limited time exclusivity deal.

Stick around and we'll bring you all the news regarding Amazon's first smartphone as it happens.

The Amazon event is set to start in 6.30pm UK time.

There's live coverage on the verge. Disappointed that gsm arena isn't taken advantage of that.

The phone looks kinda plain from the Geoff Bezos demo. Let us see what it can actually do when it is reviewed by GSM Arena eventually.

phone is already out at amazons event