One of the biggest new features packed into Android 10 is the revamped navigation system. Last year with Pie, Google introduced its first take, which could really only be described as a half-baked attempt, at best.

Gesture navigation is anything but new in the mobile world. Many Android device makers have already been shipping their own interpretations in the past couple of years, following Apple's lead. But one of the main benefits of using gestures over navigation buttons is the added usable screen real estate. Except Google's version in Pie didn't actually get rid of the navigation bar, which makes that point moot.

Better luck this time? Well, it's complicated. The new system, called "Fully gestural navigation" in Settings, is an improvement, although Google's implementation has managed to complicate in-app navigation a lot, making for an unreliable and unpredictable user experience, because of two things: how it chose to go about marrying the new Back gesture to the concept of slide-out navigation drawers in apps (which are still very prevalent), as well as the issues with third-party launchers.

First things first. Here's what you get if you enable the new system: swipe up from the bottom to go home, swipe up and pause to get the multitasking menu. If you want to reach the app drawer, swipe up again after you've paused. In the Recents view the Google search bar shows up at the bottom with five suggested apps under it, if you move this panel up you'll get the full drawer. To go back at any point, you swipe from either the left or right edge of the screen.

To quickly switch between apps, either swipe up then right (or left), or simply swipe right or left on the line that shows up at the bottom of the screen at all times once you enable the new gesture navigation system.

There's an obvious conflict between the new Back gesture and the one that brings out an app's hamburger menu-enabled navigation drawer. Before, swiping from the left to the right in an app with such a menu would reveal that navigation drawer every single time. Now though, the phone needs to realize what you're trying to actually do - that, or simply go Back? 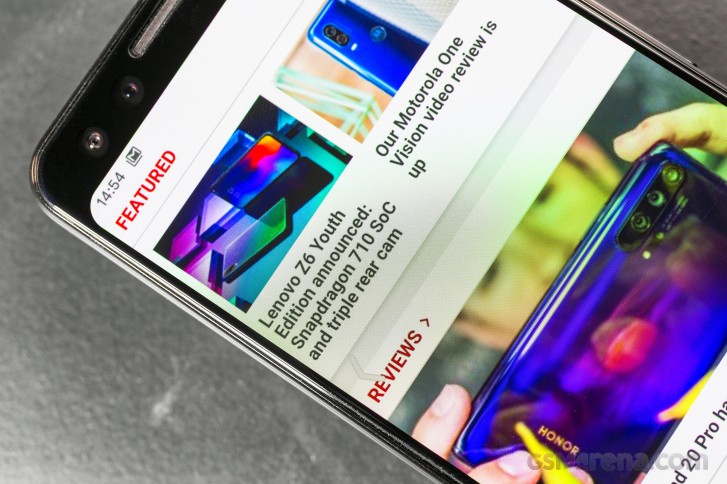 This has been an ongoing headache for Google ever since it launched the first public beta of Android 10 (then still referred to as Android Q), and the company has tried to 'fix' the problem in various ways that make little sense.

We still can't fathom why it wouldn't just ape Huawei and Xiaomi's gesture systems entirely - and especially the way those handle this conflict. It's a pretty simple solution, and one you get used to in no time: swiping from the left triggers the app's navigation drawer if the swipe originates in the top part of the screen, while if you start it lower you get the Back action. That's it.

Google could even have chosen to have the Back gesture only trigger from the right side, if it wanted to simplify things even more. But no, the company's solution to the problem it created is to give you a slider that lets you adjust how 'sensitive' the Back gesture is. And you can also tap and hold the left edge of the screen to make an app's slide-out navigation drawer pop out without any swiping required. We have exactly two words for this: needlessly complicated.

But wait, it gets worse: Google plans to let app developers set 'exclusion zones' for the new system, for areas in which the app's own navigation might conflict with the Back gesture. So if an app has a slide-out navigation drawer, its developer can override the Back gesture on the left side (where the drawer resides) or just parts of it. RIP consistency, then - not that Android's 'Back' action has ever been consistent, but still. Think about it: different apps may choose different behaviors, so the same gesture would yield different results - which aren't obvious from the get-go. You'll basically have to swipe and see what happens. Hope for the best. 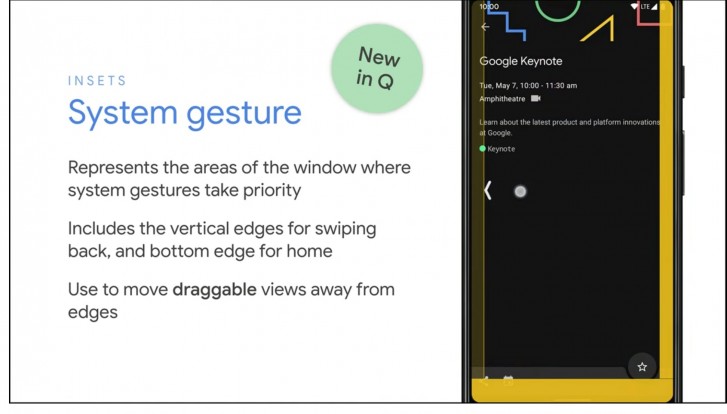 You can still tap on the hamburger itself, of course, but since most people are right handed and that is in the hardest-to-reach place on a screen for someone holding and operating a phone with the right hand, that's not ideal.

And then there's the fact that third party launchers don't support the new fully gestural navigation system, through no fault of their developers. Essentially, because the app drawer is tied to the navigation system (invoking it requires two swipes from the bottom), and the app drawer is part of the launcher you're using, the launcher has to be able to work together with the new system. Except developers of third-party launchers can't get this to work because Google isn't allowing them to, yet. A fix is supposedly coming later this year, which should allow your favorite launcher that isn't the built-in one to work with the new gestures, but until then you need to pick: either use a third party launcher, or the gesture navigation. If you go with the former you can't enable the latter, the option is greyed out in Settings.

A smaller nitpick we have is that while the huge navigation bar of old is indeed gone, there's still a tiny version of it, with a big pill/line-shaped element in the middle, sitting pretty at the bottom of the screen. This reminds us of Apple's similar UI cue to get people to realize they're supposed to use gestures, but we're not convinced anyone has ever seen that and went "oh, yeah, I totally need to swipe from there to go somewhere". Not to mention that Back isn't a gesture that's initiated from that space. 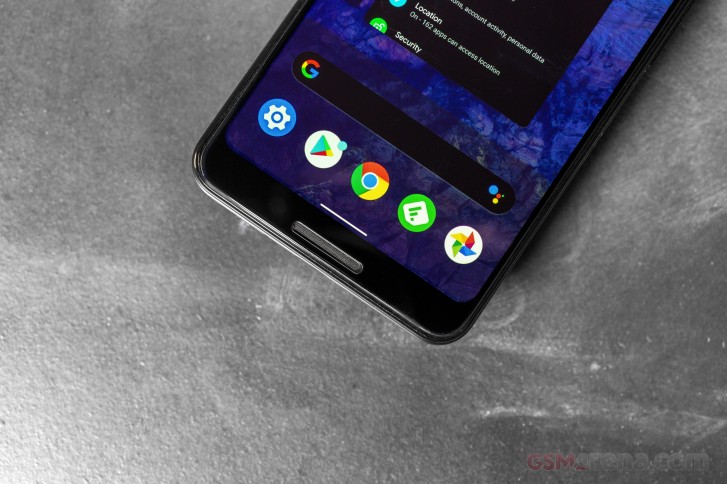 If you're wondering how you can quickly bring up Google Assistant since there's no more Home key to long press, you can swipe diagonally from the bottom left or right corner and it will show up. To make this discoverable you'll get some thin curved lines show up in those corners - don't call them 'love handles'. And of course on six out of eight Pixel models there's also the option of squeezing the frame to accomplish the same thing.

Interestingly, after last year's Pixels came with only the gesture navigation system and no three-button navigation option, in Android 10 you have three options for how to go about the UI: the new gestures, the old gestures (why?), as well as the fixed navigation bar with Home, Back, and Recents buttons. If that sounds more messy than choice-y, it definitely is.

The running joke that it can't be a new Android version without a change in notifications still holds true in 2019. Google has once again tinkered with notifications, and while it hasn't done so as much as in some previous versions, the changes are still pretty significant.

First off, Smart Reply is now built into the notification system, and as such it will work for any messaging app you have installed. What's more, it does its magic of suggesting a reply for you in the app's notification without requiring an Internet connection - it's all powered by on-device machine learning. Oh, and Smart Reply now also suggests actions you may want to take based on the contents of a message, not just replies - so if you receive an address, you'll get a suggestion for viewing that in Maps. Tap the suggestion in the notification, and you're instantly shown it in Maps - without the need to tap the notification first to get to the messaging app and then tap the address. The amount of time this will save you can quickly add up. 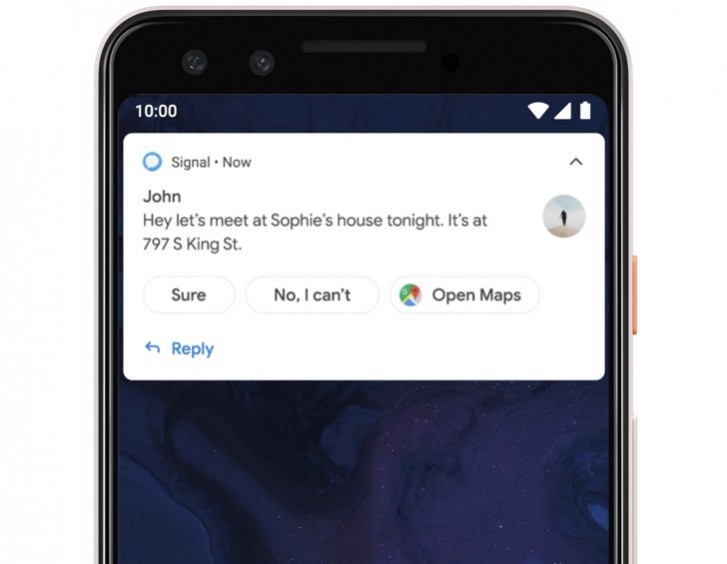 When you tap and hold on a notification you get a new menu that lets you select whether that app's specific notification channel that triggered that notification serves you Alerting or Silent notifications. The former will make a sound and show in the notification drawer, status bar, and on the lock screen, while the latter are, well, silent and appear only in the shade.

You can change whether notifications from an app are Alerting or Silent on a per-channel basis, but this new setting means snoozing notifications is no longer possible. A new "Notification assistant" will by default automatically prioritize notifications for you, so manual adjustments will only be needed where it goes wrong.

It's great to read about Android 10, sure do wish there were a simple way to find phones with it. Any word on when 10 is going to be added as a filtering option in the Phone Finder? Apologies if this had been addressed, it's a damned difficult t...

Yep. It's true. And I really miss those old CSS tricks for making 3-D effects like beveled button edges. You could do so much with color and shading. Material Design is suitable for peeps whose right brain is numb. :)

I cannot agree with this: "And the traditional three-button navigation bar has returned too, bafflingly." What's baffling is that you spout that piece of nonsense right after you trashed the alternative - the new gesture navigation. Well that deser...