Now that the Pixel 3 and 3 XL have reached the end of their product support cycle, the next ones in line are the Google Pixel 3a and 3a XL. They are scheduled to receive their final security patch in May 2022 and when the update schedule went up earlier today, it wasn't clear whether the Pixel 3a duo would be eligible for Android 12L beta. 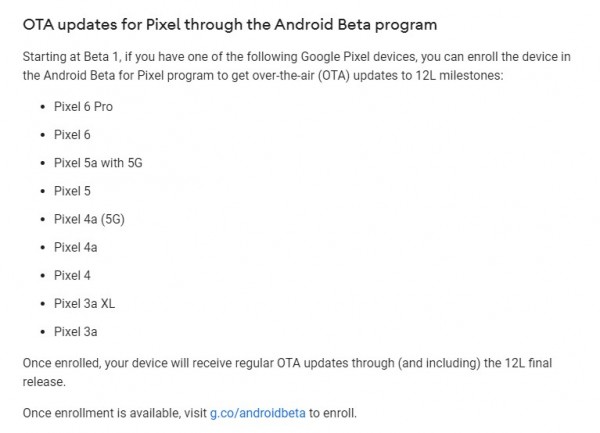 The Pixel 3a is officially getting the Android 12L beta. Google just updated the page. https://t.co/TXgsuiRExe

Android 12L is scheduled to receive its Beta 1 build starting in December, with the final release expected sometime in Q1 of 2022.

Android 12L is a build of Android that's tailored for tablets, foldables, and ChromeOS devices, optimized for form factors with larger displays. Android 12L will also be an incremental update for smartphones that run Android 12.

Notifications, quick settings, the lock screen, and home screens are optimized for larger displays with new two-column layouts. Users in the Play Store will also be notified when an app isn't optimized for use on large screens, putting some pressure on developers to update their apps.

Google fixes a bunch of Pixel issues with November update, leaves Pixel 3 and 3 XL behind

Because pixel 3 is 2018, and 3a is 2019, that means pixel 3 reach end of major update at 12, while 3a may end this year support with 12L consider this is an incremental update, but who knows when 13 release this year and still get it, right?

why would google not open this test to tablet and foldable users?