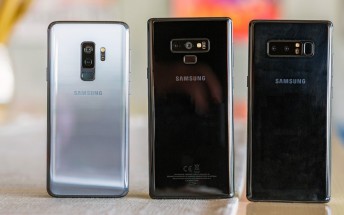 Earlier, XDA-Developers revealed Android Pie changes that are coming in a future update for the Samsung Galaxy S9+. Now, XDA finds evidence that there might be four Galaxy S10 models including a 5G-enabled one.

In the early firmware files, there are four devices codenamed beyond 0, beyond 1, beyond 2, and beyond 2 5G. The small files containing these names dont contain anything much more than that. Heres a breakdown of the names and which device they might represent.

Each model is referred to as beyond which is the main codename for the Galaxy S10. Then, theres a number where 0 is the smallest sized device, 1 is a mid-sized device, and 2 is the largest variant. Samsung might decide to launch three versions of its S10 much like how Apple launched three new versions of the iPhone X last week.

The q in the name represents a Qualcomm Snapdragon model while those simply without a q pertain to the Exynos variants. Most devices end in lte signifying this obvious inclusion of a 4G modem, however, there are a couple of versions of the beyond 2 that end in 5G.

Were expecting the beyond 0 to be an S10 with 5.8-inch display and a single rear-mounted camera. The beyond 1 could be either another 5.8-inch device with a second camera, or a device with a slightly larger screen that would sit between the S10 and S10+. Next, the beyond 2 could be the S10+ with possibly a 6.44-inch display and triple rear cameras + dual front ones and the beyond 2 5G would be a 5G-enabled version of the S10+.

Of course, these developmental references dont guarantee the claim that Samsung would actually manufacture four versions of the Galaxy S10. Its still quite early to say whether the S10 would even be released as a 5G-capable version of the future flagship.

As for processing power, XDA reports that the S10 could have either the Snapdragon 8150 or an Exynos 9820 while a 5G model might have a Qualcomm X50 modem or a the Samsung Exynos 5100 modem, both of which would support 5G connectivity once carriers start to light up the new towers between the end of this year and 2019.

Maybe there will finally be a modern Galaxy Mini again???

S9 series only failed because it looked the same. If the rumors are true, then the S10 will have significant upgrades that will increase sales for sure