Kantar Worldpanel released its report on the smartphone market for the three months ending in November. Several outtakes are that Europe loves a new iPhone, Android strengthens its positions in China and Windows Phone is going into the abyss.

The Android share declined in the United States, Great Britain, France and Japan as iOS made gains on the back of the iPhone 7 launch. 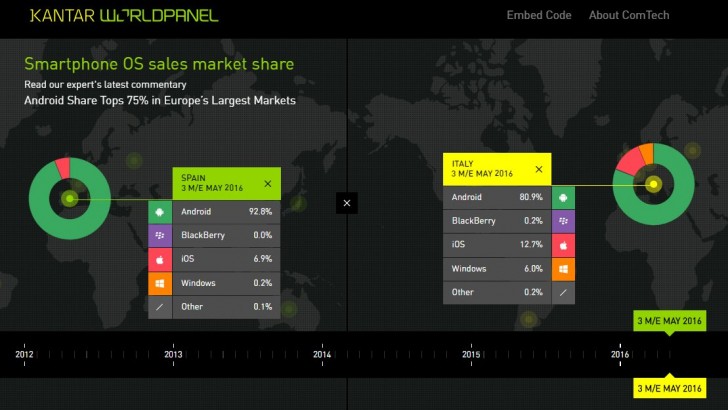 In US iPhone 7, iPhone 7 Plus and iPhone 6s were the three most popular devices with a combined 31.3% share. After them were the Samsung Galaxy S7 and S7 edge respectively at fourth and fifth with 28.9% of smartphone sales. Google Pixel snatched 1.3% of sales in the same period.

China, on the other hand, saw Android rose 7.2 percent points to 79.9% with Huawei having a quarter of all the sales. Oppo posted strong growth with 12.9% signaling the first potential shift in the market since Huawei overtook both Apple and Xiaomi in 2015. In terms of single devices, iPhone 7 is the best-selling device in China at 6.6%. Europe’s Top 5 markets saw iOS gain 2.7pp, while Android also expanded by 1.7pp. The two platforms have pushed Windows Phone and other platforms down to a combined share of just 3%.

Check out all the data from Kantar in the interactive chart below.

Definitely - iPhone is the only phone above 200 USD that has such a low resolution at 720p (technically 735) screen - so no competition....

nope this story just shows why the note 7 had to be sabotaged, ios figures not on the back of the i7, but by the grace of the note7 apple didn't gain, just that Samsung didn't have their product to sell, recalculate as per note 7 being sold..and appl...

Smarter than the average iOS user, that's for sure.