A quick look at the Android Wear 2.0 FAQ thread on official Google Forums reveals that the ZenWatch 2 (1.45") is now in the list of wearables that the company says have already received the update. 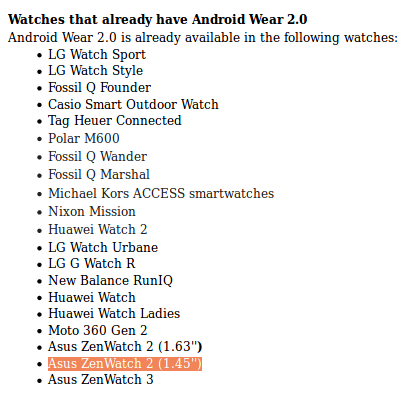 So now, the only wearables that are compatible, but haven't received the Android Wear 2.0 update yet are the Moto 360 Sport and LG Watch Urbane 2nd Edition LTE. There's, however, currently no information on exactly when the update will arrive for these watches.

Android Wear 2.0 finally arrives on the Asus Zenwatch 3, for real this time

Louis Vuitton Tambour Horizon is an Android Wear 2.0 smartwatch that starts at $2,450

What variant do you have? I think some versions have gotten an OTA update, although I am not sure they are still pushing it. I have the Verizon version of the watch, and I have not received and don't see where anyone else has received the update fo...

Zenwatch is such as "Bezel-full" watch! :P

The LG watch urbane 2nd edition LTE did receive the Android Wear 2.0 update. I currently in possession of one.