Were yet to see the European and US prices for the 5G version of the Galaxy Note10 yet. What we do know about it is that that Verizon will sell it (along with many other carriers) and it should be available on August 23. Plenty of renders of the phone have leaked already, but since the official reveal is two days away, heres another look: 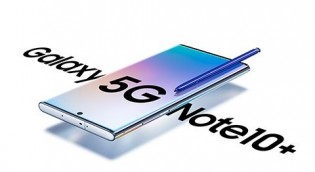 There are no external differences compared to the Samsung Galaxy Note10+  when it comes to connectivity, its inside what counts. In the case of the US model, that will be a Snapdragon 855 chipset connected to an X50 5G modem. Or maybe that's just Verizon's version, other US carriers might get phones with the Exynos chipset.

Outside of North America the phone will definitely be powered by an Exynos 9820 and probably a Samsung modem. The 5G version will come with up to 12GB of RAM and 1TB storage.

You dont have to wait until the 23rd, Samsung is already accepting reservations in the US either for SIM-free units or on contract with a major carriers.

The first deals have been announced already too, like a free Galaxy Note10 if you get the 5G model from Verizon or $50 off the Samsung Duo Wireless charger if you reserve a unit from Best Buy.

Both are, but this is a samsung article. bringing up apple for no reason

I really like this reply lolll Straight for the jugular :)