Some users may say that we don't need thinner bezels than we already have on the vivo NEX or Oppo's new Find X, for example, but most of us will never get enough of that sweet screen space. Samsung belongs to the latter and has a way of tackling the technical issues that may arise with ultra-thin bezels. 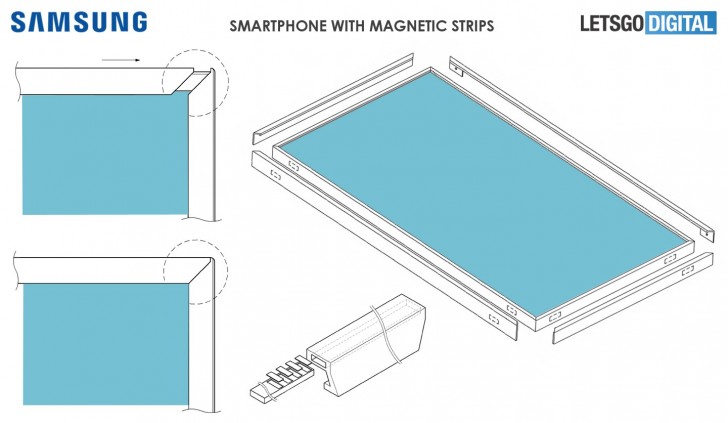 We had already done a piece on Huawei's approach the other day and it seems that Samsung has a similar solution to the problem with some notable differences. While Huawei is using only two metal strips on the sides, the Korean giant is betting on all four and instead of adhesive, the company wants to use magnetic snaps.

These snaps hold together all four strips and while this design concept looks more prone to breaking, there's a significant advantage to it. If one of the frames gets damaged, they can be easily replaced by the user himself. The patent also reads that the design can be applied not only to smartphone manufacturing but all electronics carrying a display - laptops, TVs, tablets, etc.

Let the next era of bezel-less smartphone design begin.

Good to see that it's flat screen and not curved :)

Am I the only one who thinks companies are racing to make phones more fragile? I'd snap a plastic magnetic strip over that edge for protection. Give me a stainless steel body coated with rubber on the inside and that's a worthy flagship to me.

This is not a great idea, patent cost you more money with a slightly improvement. I have another concept and it is exactly better than Samsung concept, I wish Sony can do it not Samsung.