AnTuTu released its monthly Top 10 list of best performing Android phones. The undisputable leader in December was the ZTE nubia Red Magic Mars with a score over 320,000, while the Huawei Mate 20 came in a somewhat distant second with 309,130 total points. 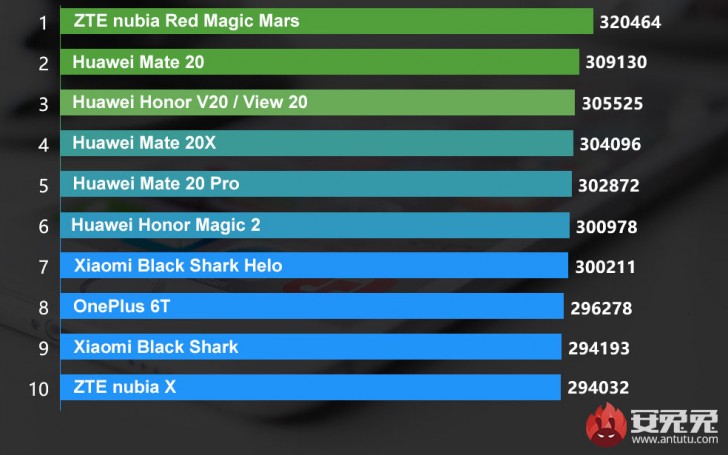 AnTuTu benchmark results are divided in four components, with the final score being a sum of all four numbers - CPU performance, GPU performance, UX and memory.

In addition to the gaming phone that sits on top of the table, we can also see the Xiaomi Black Shark Helo and its predecessor Xiaomi Black Shark take 7th and 9th. Another gamer-centric device is the Huawei Mate 20X which reached the 4th highest score on AnTuTu. The China-only device is one of five Huawei smartphones in the list, two of them being part of the Honor subsidiary.

Phone is not out yet so this rewiews are as true as AT and T 5G network or T-mobile 9G network :-)

Reviews say the Z5 Pro has camera issues (slow auto focus, average low-light photos), so I hope they'll fix that with the GT.