The famous AnTuTu benchmark has posted its monthly report of top 10 best-performing smartphones and we see some new additions to the table. 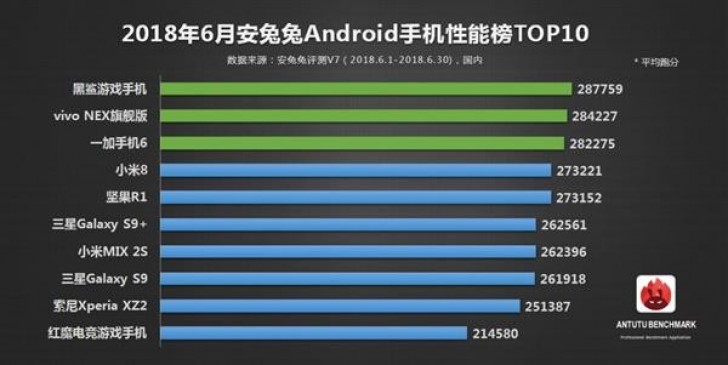 As expected, almost all of the phones in this table are Snapdragon 845-powered but since they are designed differently, have different thermal constraints and run various versions of Android, scores vary a little bit.

The first place goes once again to Xiaomi's gaming Black Shark while the newly announced vivo NEX S comes in as close second. The rostrum is completed by the OnePlus 6 with marginally lower result.

It's important to note that the ZTE nubia Red Magic is the only Snapdragon 835-powered device here and the Xperia XZ2 is a brand new addition. Also, the ranking includes only the Snapdragon variants of the Galaxy S-series.

All benchmarks are run using AnTuTu version 7, the scores being average per device, not the highest ones. The data is collected for June and are included only handsets that have data from at least 1000 units.

New apps and games added to the Android Excellence list

From a user who never used S8. I have more than a year it actually become more faster with 9.0 experience update

Anrutu takes a lot of measures not only CPU, but RAM capacity/speeds, R/w speeds of memory, gpu capabilities, browsing and so on. And no pixel 2 so was not fastest performer around