Apple recently hit the trillion dollar valuation (slightly behind schedule) and you may be wondering why. Counterpoint Research has two charts that will quickly explain it – Apple took in 62% of the global profits from phones during the second quarter of this year. That’s $6 billion in profits on $30 billion of revenue.

The Q2 profits of chief rival Samsung have been falling for the last three years and it took home 17% of the global profits, less than a third of what Apple made fro its phones. Meanwhile Chinese brands have been growing steadily with Huawei and Xiaomi getting a huge boost this year.

It’s easy for Apple to have good profit margins – nearly all of the phones costing $800 or more were sold by Cupertino. The $600-$800 segment is a fairly even split between Apple and Samsung (it’s 44% vs. 41%, the chart makes the difference seem much bigger). Samsung’s numbers declined recently as the Galaxy S9 underperformed. 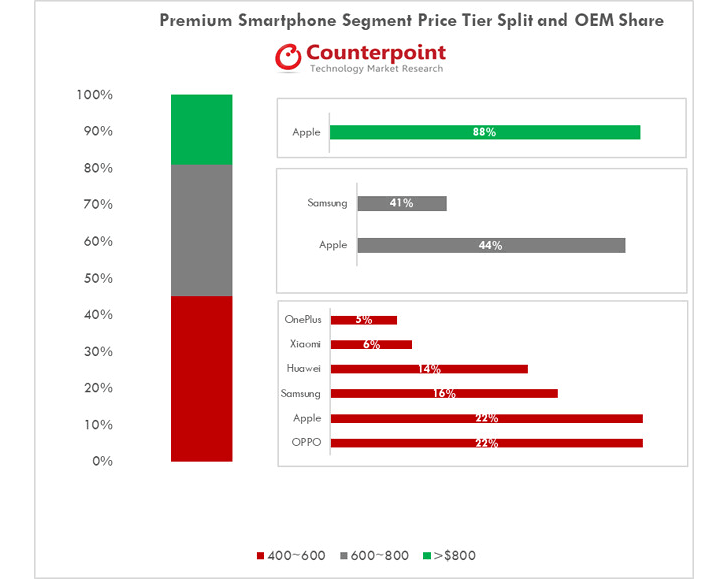 It’s the $400-$600 segment where the Chinese brands show their strengths – after all, most of them sell their flagships at these prices. Here Oppo matches Apple, Huawei nearly matches Samsung and OnePlus and Huawei fight for the leftovers.

Analyst: People are buying the iPhone XS Max but not the XS, will buy XR the most

Hey I am not wrong cause my son is using iPhone 7 only, we don't have iPad. But I'm paying for additional storage every month. Of course it's only 4 USD per quarter and you can multiply it with millions of others like me and that adds to their quarte...

Well don't look at sales. Just buy phone you like. I hate that many people say you can't afford it. It isn't true. I can afford any flagship smartphone. But iPhone isn't my thing. Android is my life.

it's funny when Apple fanboys keep using "you can't afford it" as the reason why people chose don't wanna use iPhone FYI, I am currently in a small town in Cambodia, many data entry clerk earning less than $200 per month, and even some security ...