The new Apple iPad Air 2 display is fully laminated, meaning its components (LCD, touch sensor and cover glass) have been molded into one and now have an antireflective coating that Apple claims will make this screen the least reflective ever.

Here's what the iPad Air 2 display looks like under a microscope. 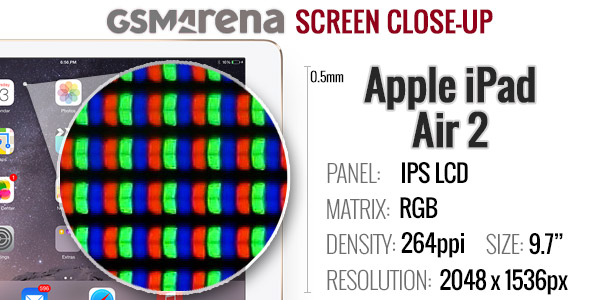 The Apple iPad Air 2 showed solid numbers in our dedicated display test. Compared to its predecessor it offers a slightly decreased brightness at both 50% and 100% but also a slightly higher contrast ratio, which could be accredited to the new laminated display.

Apple made the iPad Air 2 thinner and thus it has a smaller battery compared to the original iPad Air. But the result hasn't hindered battery performance too much. The video playback test showed an almost exact score. Web browsing was 1 hour worse compared to last year's model and generally behind the competition.

Still the iPad Air 2 boasts respectable numbers, especially from a device so thin. 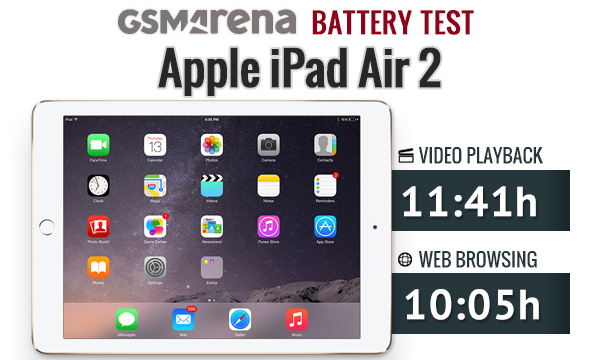 If you are interested how these results compare to other tested devices, check out our battery life test result table.

The Apple iPad Air 2 has much better connectivity thanks to some key advancements in chipset radios and Wi-Fi technology. First off, the new iPad Air 2 retains the MIMO technology (with dual antennas for better signal) and comes with Wi-Fi 802.11ac support that's more than twice as fast as before - up to 866 Mbps.

The Wi-Fi+Cellular iPad Air 2 has gained a speed increase too, now supporting up to 150Mbps of LTE downlink and support for a total of 20 LTE bands in all model variations.

Apple has designed its own SIM solution as well, dubbed Apple SIM. It allows a single carrier-agnostic SIM to connect to AT&T, Sprint and T-Mobile in the US and Everything Everywhere (EE) in the UK depending on your initial setup (and contract, of course). The solution has seen resistance from some of the carriers though so don't expect it to work as advertised just yet.

Bluetooth 4.0 with A2DP and EDR is here and, complete with Wi-Fi, facilitating Apple's AirDrop, which can share docs and files across iOS devices and the latest Macbooks with OS X Yosemite. Using AirDrop for transfers to non-Apple certified devices is a no-go.

AirDrop is available in every share menu throughout the iOS 8.1. You can send pictures, videos, App Store and iTunes links, Notes, Maps links, all kind of files from file managing apps (i.e. Filer, Flash Drive, Air Disk, etc.), Office docs, and more. If there are people with an active AirDrop service around you, they will automatically appear in the dedicated AirDrop field. You just mark your files, select the recipient and hit the send key.

Regular USB mass storage isn't available but there's a workaround using the iTunes computer software. You can store whatever files you want on the iPad, but those are only made available to the app that you've dropped them onto. Good thing is you are not restricted to files compatible with the said app and you can simply drag & drop files that you would download on another computer later on.

The iPad Air 2 Wi-Fi + Cellular has a built-in A-GPS receiver with GLONASS support, but the Wi-Fi only tablet does not have it (this is standard for iPads).

Apple is continually improving its Find My iPad service. The iOS 7 update brought the so-called Activation Lock. This will not only protect your personal data but will also make your iDevice inoperable once wiped, unless you enter your Apple ID. This means the stolen or lost iGadgets will be of no use to thieves or finders. Of course, this protection is not bulletproof and experienced hackers will have a ball with your iPad, but this might as well make your Average Joe think twice about keeping the iPad to themselves.