Apple iPad mini review: One for the road

One for the road

Wait, did hell just freeze over? Maybe a couple of degrees cooler? Rumors of a mini version of the iPad had been laughed at, dodged and denied - not necessarily in that order and often all at once. But here it is - the iPad mini is finally a reality. It caused due measures of excitement and perhaps a bit of disappointment. Yet, in typical Apple fashion, it's an excellent piece of hardware. In short, it's a polarizing device that may as well be the next best-selling tablet. 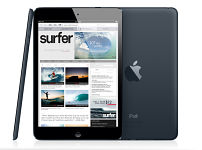 You have to hand it to Apple's R&D team - they know how to design hardware. The iPad mini is super thin and light, with a cool aluminum shell. Sure, they swore they'd never make a 7" tablet and the truth is they still haven't - the 7.9" screen of the mini offers 36% more real estate than the screens of the Google Nexus 7 and the Amazon Kindle Fire HD.

Less bezel on the left and right of the screen combined with the ~310g of weight make it reasonably comfortable to hold with one hand. Apple did make some compromises, which drew a lot of ire. Here's the summarized list of what's good and what's bad about the Apple iPad mini:

The disadvantage list may seem longer than usual but most of the items there are general complaints that apply to virtually all Apple products, like the absence of a memory card slot. The way we see it, there are three main problems with the iPad mini - the (relatively) low-res screen, the old chipset and the price.

Apple products have so far effortlessly hit it big with users despite their perceived limitations compared to the competition. The new crop of iPads - the iPad 4 and iPad mini - already sold in the millions.

iPad mini in our office

The software - iOS 6 - should be very familiar to Apple users, but the hardware is new. It's not like the big iPads, which mostly varied in thickness, this one has been designed to comfortably hold in one hand and slip into a coat pocket.

Some analysts have gone as far as to say that the iPad mini will become the iPad - it's highly portable, capable enough and drawing on the vast resources of the Apple eco-system. And if you adjust for the "Apple tax", the mini isn't that expensive.

Jump to the next page to find out just what you're getting with the iPad mini.

unfortunatly no you cannot play pubg on it

Can i play pubg mobile on it