The iPhone 11 Pro duo is spearheading a change in Apple's design and we very much like what we are seeing. But let's start with the first impressions. 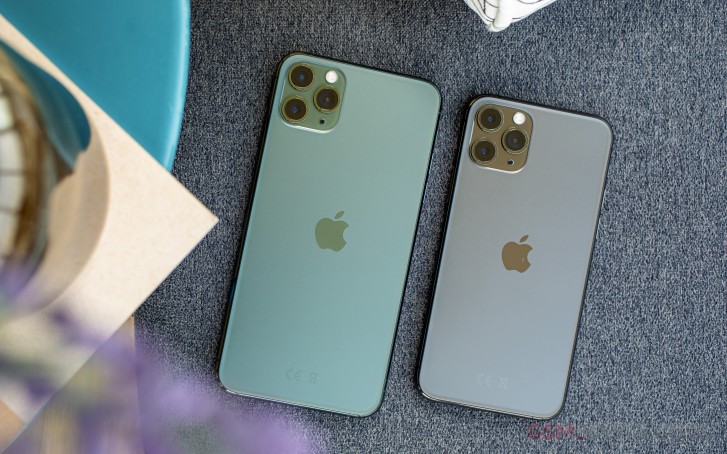 Getting the iPhone 11 Pro out of its box felt quite familiar at first. The phone has the same shape and feel as the XS, and X, and it's almost impossible to feel the extra 10g the 11 Pro has gained since.

The 11 Pro Max, on the other hand, while as big is the XS Max, is 20g heavier and you can tell that immediately. If you have spent a year with the first Max, you will know you are holding a heavier phone right out of the bat. 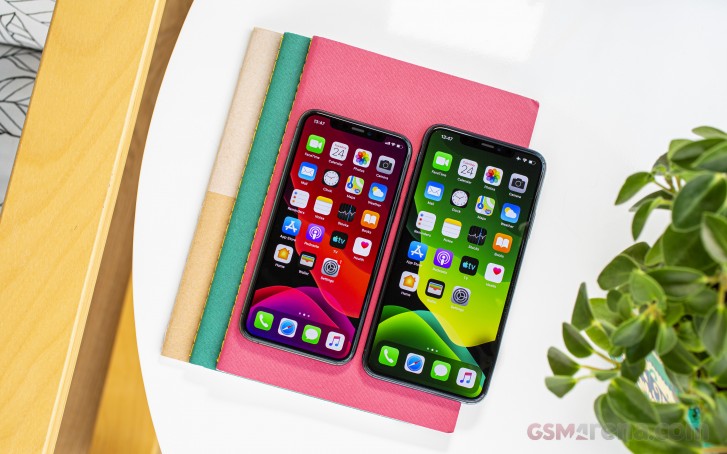 Both iPhones look very familiar the front hasn't been changed since the iPhone X launch in 2017. There is either 5.8" or 6.5" OLED display, quite bezel-less, with a gigantic notch at the top. There is no wasted space at the bottom, the screen controller is actually under the screen instead of below. This is what Apple has established as bezel-less although you can clearly see some very thin black strips, equal in size, around the OLED screens.

The notch is inevitable for Apple, at least for now. It contains the earpiece that also doubles as a speaker, a couple of sensors, the 3D TOF sensor and the new 12MP f/2.2 selfie camera. Apple focused on selfies this year and the new snapper can do 4K clips at 60fps and 4K at 30fps with extended dynamic range, slow-mo is available, and EIS is working on all resolutions and frame rates, all the time. The screens on both iPhone 11 Pro and 11 Pro Max are protected by "the toughest glass on the planet". It is made by Corning and it's an improved piece since the one used on the XS lineup. Given how much money Apple is injecting into Corning, it's hardly surprising Apple is once again using its glass. Every iPhone since the first one has been guarded by a custom Gorilla Glass, and last year Apple used a custom version of Gorilla Glass 6.

According to the brave drop testers out there (thanks, guys!) the new protective glass on the iPhone 11 Pro is indeed quite tough, exceeding some expectation and arguably tougher than the one on the XS iPhones. It's still glass though so a hard fall might easily be the end of it.

Apple also applies oleophobic coating on all iPhones and the 11 Pro series enjoys it as well. This is your shield against fingerprints and smudges, and while they do eventually stick on the 11 Pro and 11 Pro Max displays, they are very easy to clean - one wipe with the side of your palm or part of your shirt is enough. 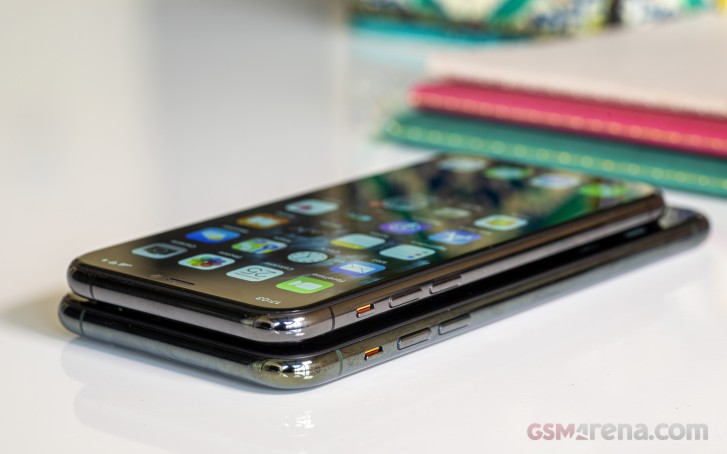 We are glad Apple is sticking to the stainless-steel frame it introduced on the iPhone X. It hasn't changed one bit - slightly curved and with the all-glossy polish. Its color is dark green on the Midnight Green and dark gray on the Space Gray models, but it should be silver on the Silver and golden on the Gold models. It's rare for a maker to perfectly match the frame paint with the panels, but Apple has done it for yet another year.

The frame is far more prone to collecting smudges as it is super glossy and while it sure isn't helping the grip. Still, when it's clean, the great looks are certainly among its key features.

And just like on many other iPhones before series 11, the new ones have the same buttons around the frame - a silent switch and volume keys on the left, the power/Siri key on the right. The SIM tray is around that key, too. 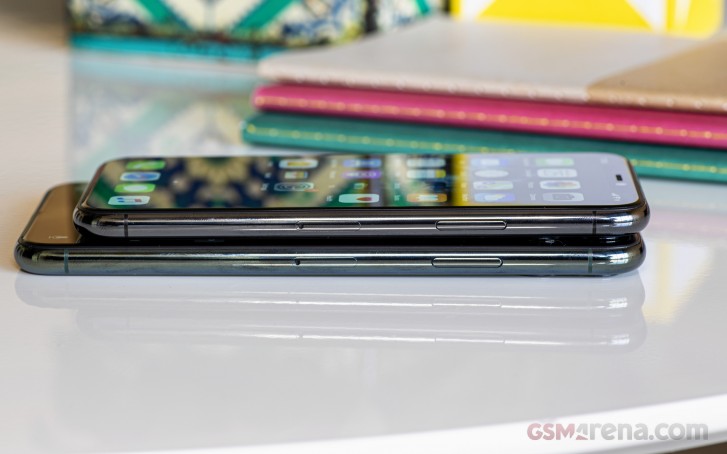 Apple is still sticking to the Lightning port even though we all know it is going sooner rather than later. The new iPads already come with USB-C, and even the new iPhone chargers use a USB-C port, so we figure it's coming to the iPhones in a generation or two.

The mouthpiece and the second speaker are flanking the said Lightning port, hidden behind a few tiny holes in the chassis.

The iPhone 11 Pro and iPhone 11 Pro Max rear panels are a whole different story. They are made of the same Ion-strengthened glass by Corning, mostly flat if we don't count the 2D edges, but for the first time ever the finish is not glossy, on the contrary. Apple calls this textured matte glass and while we do agree, there is a better word that describes it, and it's frosted. No matter what color iPhone 11 Pro or Pro Max you opt for, all of those come with frosted finish over at the back. 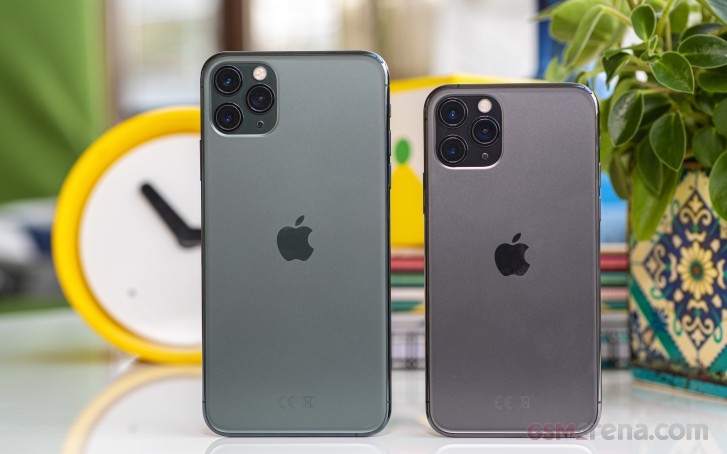 Unlike the OnePlus 6, which head a somewhat similar finish on the back, the iPhone 11 Pros are not slippery. The new texture provides for some grip and feels more secure in hand when compared to the XS generation.

The iPhone 11 Pro Max, being the largest one in the pack, still requires some attention when handling it naked, as the new back is just not enough to make it not slippery, but the smaller iPhone 11 Pro model does feel noticeably safer when used in one hand or for shooting stills or videos.

Smudges and fingerprints are barely noticeable, it at all, thanks to the frosted finish. We haven't yet put these iPhones in the sand to see if the fine dust will be easy to clean from the new back, but here is hoping.

And before we go to the new camera setup, we noticed another changed on the back. It's not big of a deal, but the iPhone inscription is gone. Not that people won't know you are using an iPhone - there is a giant glossy bitten apple in the middle, but still. Apple managed to get rid of the iPhone logo but not from the regulatory icons - that's what's bugging us. Sony managed to put these into the SIM slot, so here is an idea for you, Apple. 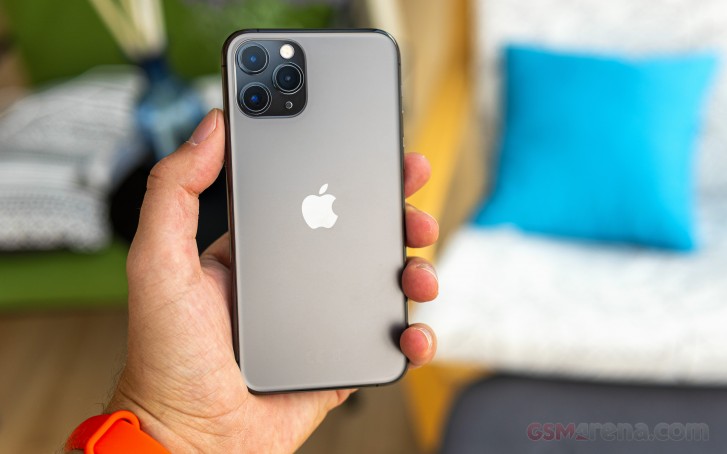 The new triple-camera occupies a special square at the top left of the iPhone 11 Pro and iPhone 11 Pro Max. The glass hump is pretty minor and definitely not what we expected from the official images - the whole bump, along with the lens rings, is half as thick as it was on the X and XS.

The glass on the camera bump is not frosted but glossy, we guess for additional accent on the snappers. The triangle arrangement is new not only for Apple, but for the industry, too. The jury is still out on whether this way it looks any better, but we guess, it wasn't the specific looks they were after when they picked this particular arrangement. 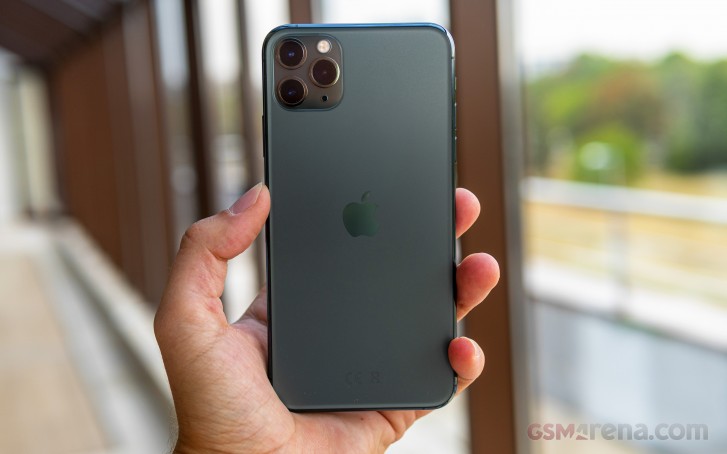 The wide+tele 12MP duo is here to stay, both snappers featuring OIS. The third 12MP camera is an ultrawide shooter and obviously, Apple is playing catchup here. It has no optical stabilization or autofocus, so it's not as premium as some may have thought. Apple has prepared some nice software tricks for the camera though, and we'll get to these later in the camera section of this review.

Inside the square setup is also an improved dual-LED dual-tone flash that's supposed to be brighter than before. And there is one very small meshed hole, which we guess might be housing the mic(s) used for video recording. The new setup looks proportionately bigger on the smaller iPhone 11 Pro, as expected, which probably contributes for lesser aesthetics many agree on. Then the iPhone 11 Pro Max is a bigger phone and we'd say this setup sits better on its corner.

The phones wobble a bit when left on a desk, but it's not as much as the iPhone X and XS did.

The minor increases in thickness, the extra space gained from removing the 3D Touch layer, and the reduced motherboard size has allowed Apple to put bigger batteries within the new iPhones. The regular model has seen a 20% bump in battery capacity, while the Max enjoys a 25% increase compared to the iPhone Xs.

And last, but not least important, Apple has secured even better the iPhone 11 Pro smartphones against water. The duo is IP68-rated and the two can survive submersion in water up to a depth of 4m for 30 mins. In contrast, the XS gen was certified for the only 2m of depth. Handling the iPhone 11 Pro and 11 Pro Max is both new and familiar experience. The smaller model fits perfectly in hand and one-handed operations are pretty easy. The Max will make you stretch you fingers but it was never really meant for one hand. 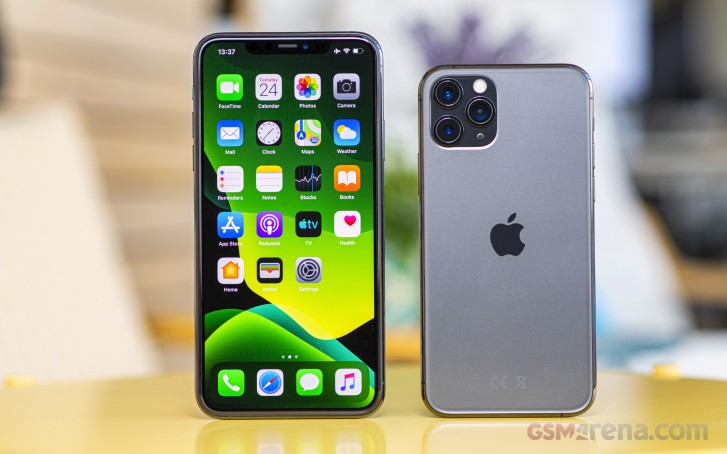 The new frosted back is a welcome addition not only because of the extra grip, but for the sake of change in looks. It was getting boring. And now you can physically feel your new phone is different from the last one, which is nice for once, isn't it?

Thax apple for such a great product

Have had Pro Max since its premiere and had zero issues with it and wouldn’t change it for any other phone.