The color of magic

Underneath the back panel lies a non-user-accessible 1,510 mAh Li-Po battery, which is 70mAh more than the iPhone 5 had. This is basically the only department where the iPhone 5c got a minor upgrade. Apple says the battery should last for up to 10 hours of calls or 250 hours of stand-by, quite a bump up from the iPhone 5's promised 8 hours of talk time and 225 hours of standby. We're guessing the iOS 7 update has something to do with that as well.

We ran our traditional battery test and the iPhone 5c achieved a pretty good score of 52h, which means you'll only need to charge it once every 52 hours if you use it for an hour of talking, web browsing and video playback per day. Of course, your mileage will vary depending on use (calls and video are particularly taxing, whereas browsing endurance is great).

The score is just an hour better than the iPhone 5 results. The 3G talk time and stand-by endurances have been slightly improved, the web browser battery drainage is almost the same, while the video playback has strangely dropped by over 2 hours. 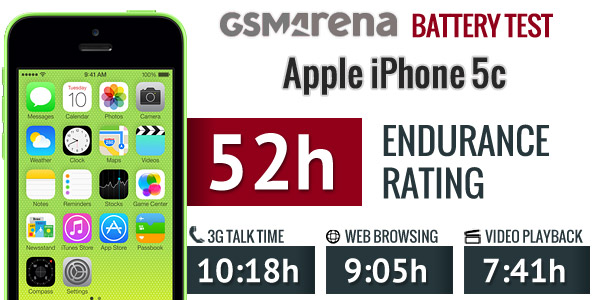 Its important to note that the iPhone 5c test unit (along with a couple of iPhone 5 units we have) had major issues with their stand-by. On three different occasions its dully charged battery got drained completely overnight. Here's hoping that Apple finds a fix for this as soon as possible as it's rather irritating to have to deal with this.

Apple iPhone 5c fits perfectly in most hands and is very easy to operate, while also being pocket friendly thanks to its compact size. The one thing that bothers us is the poor grip of the smartphone. As we mentioned earlier, you can easily drop the iPhone 5c because of its slippery plastic and not quite ergonomic edges. In the event you opt for this colorful smartphone you should be very careful when you picking it up from flat surfaces, or even as you're taking it out of your pocket.

Handing the iPhone 5c is a slippery affair

The Apple iPhone 5c comes with the same 4" IPS LCD screen that premiered with the iPhone 5. It has a resolution of 640 x 1136 pixels, which adds up to a pixel density of 326ppi.

As expected, the display offers excellent colors, contrast and viewing angles. Because the front glass reduces reflectivity, sunlight legibility is great too. Just as we expected, the iPhone 5c display turned out to be as good as last year's iPhone 5 screen in our tests.

And here's how the Apple iPhone 5 display matrix compares to that of its predecessor. You can clearly see both are pretty much the same. 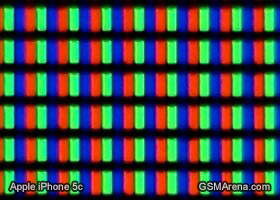 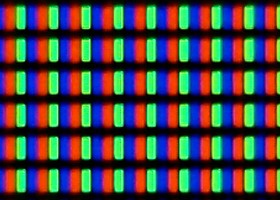 Apple iPhone 5c screen under a microscope vs. the iPhone 5 screen

iPhone displays have always had impressive image quality, but Apple is starting to fall behind by yet again delaying the release of an iPhone with a bigger display than 4". The company no longer holds the record for highest ppi on a mobile screen, and has even fallen behind in the pixel density race, where 1080p screens rule. Of course the difference between the Retina screen sharpness and that of the best on the market is only evident when you look from way closer than feels natural or comfortable, so we won't be taking any points away for the resolution.

Size is a bigger issue though and hopefully, next year's release of the iPhone 6 will see an increase in screen diagonal. Otherwise the Cupertino company runs the risk of seeing its market share continue to slip.

just make a new apple account and use that one but if you cant switch you need to make an backup of your phones data and reset it completely to fabric settings and when you start up you just login with your new account (you can create an apple accoun...