The iPhone X and the Galaxy S9+ each have a pair of 12MP cameras on their backs. But they are not quite the same. 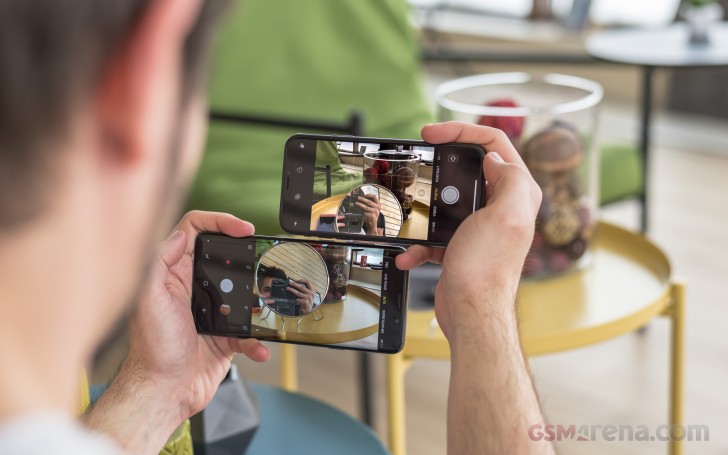 Sure, their sensor resolution is the same, but a few other numbers differ. Looking at the main cameras, the normal ones, the Galaxy's 1/2.55" sensor is larger than the iPhone's 1/3" and it's also got bigger individual pixels - 1.4µm vs. the iPhone's 1.22µm pixel pitch. In theory, larger sensors mean more total light can be collected, and larger pixels potentially lead to lower noise and better dynamic range. However, not the entire pixel area is used for light gathering.

You see, the Galaxy S9's pixels also double as phase detection agents, all of them - that's what dual-pixel autofocus stands for. It makes for a wickedly fast auto focus, but it also wastes some of the light gathering surface. So we shouldn't compare pixel sizes directly on these two.

The iPhone relies on phase detection auto focus too, but only a small portion of the total pixels are dedicated to the task.

This year's Galaxy's chief claim to fame is the ability to switch aperture between f/1.5 and f/2.4 on its main camera. The brighter setting lets in more light (to an already larger sensor) for improved images in dim environments, while the f/2.4 setting allows for sharper photos and larger depth of field in brighter conditions. Meanwhile, the iPhone X is using f/1.8 on its main camera. 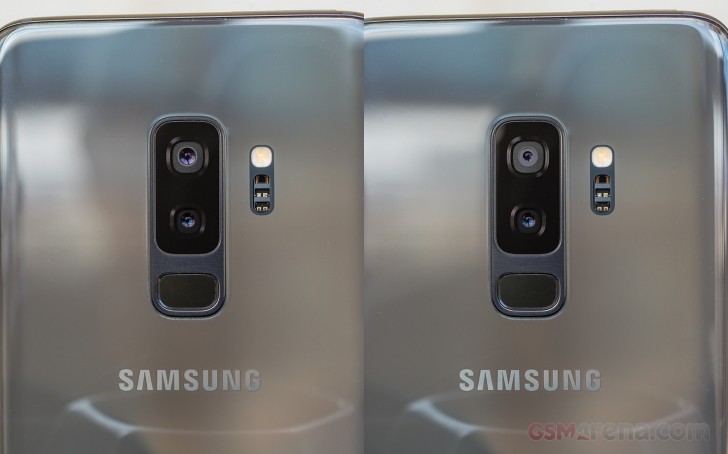 The Galaxy's field of view is wider - 2mm may not sound like much, but it's a noticeable difference when you're talking about wide angle lenses, and the Galaxy's 26mm equivalent lets more in the frame than the iPhone's 28mm.

Not so with the telephoto cams - these are, in fact, mostly the same when it comes to the numbers. On either phone, you'd be getting a 1/3.6" sensor with 1.0µm pixels, and a stabilized lens with an f/2.4 aperture and a 52mm equivalent focal length. That last bit means that on the iPhone you'd be a few mm short of a 2x zoom as 52<2*28.

The iPhone X's front-facing cam has a 7MP resolution, smaller 1.0µm pixels, and a dimmer lens (f/2.2) with a much narrower field of view (32mm equiv. focal length); no autofocus either. The iPhone's selfie cam can gather depth information from the FaceID depth mapping tech, enabling a faux-bokeh portrait mode - something the S9+ can do too despite being FaceID-less.

Both camera apps have been refined over generations of smartphones, but while Apple's has been mostly unchanged, Samsung's has seen some more serious alterations. From S8 to S9 (and the respective Pluses by extension), Samsung's camera has gotten as close to Apple's as ever. 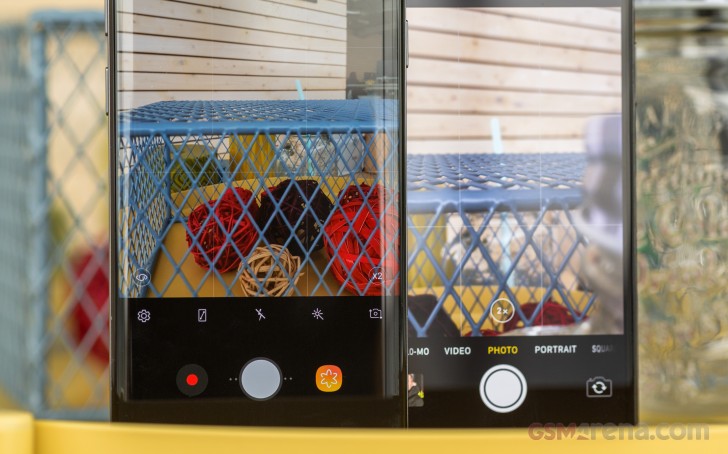 On both camera apps, you change modes by swiping left and right, and you get the option to customize the order and the modes that will be available at all. Which you need to do to get to the non-Super slow-mo, which isn't listed by default. There's no such customization on the iPhone X, but when was there any?

The Galaxy takes the swipe gesture a level up and lets you toggle between front and rear cameras with a swipe up or down - either will work. Alternatively, you can tap on a button, and it's now more easily accessible with one hand as it's not up top as on the S8. On the iPhone, only the second method is available, but the button is within immediate reach too.

One UI element that's not quite right on either phone is the '1x-2x' toggle. On the iPhone, the button displays '1x' when you're using the wide cam, '2x' when in telephoto, so it's more of a status indicator. Samsung's has the exact opposite logic - it shows the setting you'll get to when you tap it, so it shows '2x' when you're in wide-angle view, and '1x' when in telephoto. These two have the exact same appearance, yet behave in opposite ways - in our book that means bad UI design, and we are still on the fence on which of the two is guilty of it buy we're leaning towards Samsung.

Another instance of bad UI is Apple's stubborn refusal to put the camera settings in the camera app instead of the global settings menu. Maybe, just maybe, you want to switch between 4K and 1080p video recording more than once in a lifetime, right?

One thing that you may indeed limit to once in a lifetime is the use of Animoji on the iPhone X or AR emoji on the Galaxy S9+. Same, yet different, the two features let you send customized animated responses to your friends. You can only hope they remain your friends afterwards.

The iPhone X can save photos in either classic JPEGs or the newer and more storage-efficient HEIF format. Videos can be encoded using the old-school H.264 or the newer and more storage-efficient (sensing a pattern?) HEVC codec, or H.265. Compatibility has grown since the launch of the iPhones last Fall and going the HEVC/HEIF route is now less cumbersome though still not ideal. We would have appreciated a way to switch the codecs toggle for video and photo independently of each other.

With the Galaxy S9+, Samsung's joining the HEVC crowd and also lets you choose between wider compatibility and smaller files when it comes to video. Not so for stills, where it's just JPEGs.

JPEGs are what we'll be looking at on the next few pages. We'll start with some comparison shots in bright daylight. The red button below is what takes you there.

My God will bless you

I got this S9+ but going off every hours,don't know why