The iPhone X design obviously represents the direction Apple will move forward with its design. Last year that wasn't quite clear, but now the old iPhone design (wide bezels, fingerprint/home key) is officially dead. All new iPhones are iPhone X lookalikes and we guess these looks will stick for another couple of years just like the iPhone 6's were around for four years. 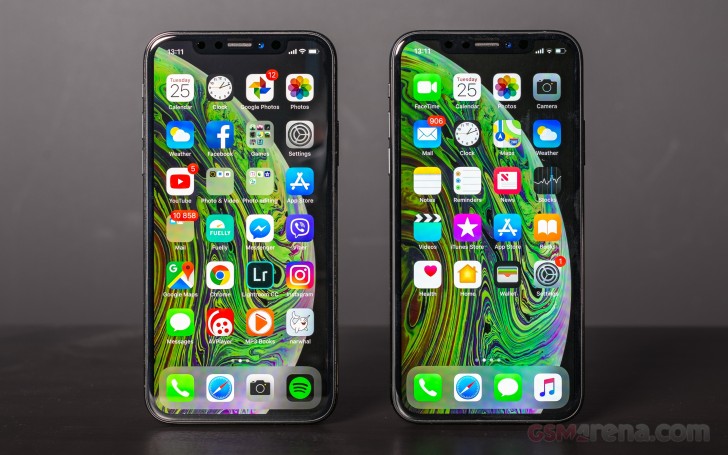 If you haven't lived under a rock for the past year, you should be painfully familiar with the iPhone X, which kicked off the notch trend.

Remember the same but different part? Well the iPhone XS design is absolutely the same as the iPhone X's (pun intended). It's still both fancy and luxurious, no two words about it. Same shape, same frame, but different kind of glass. 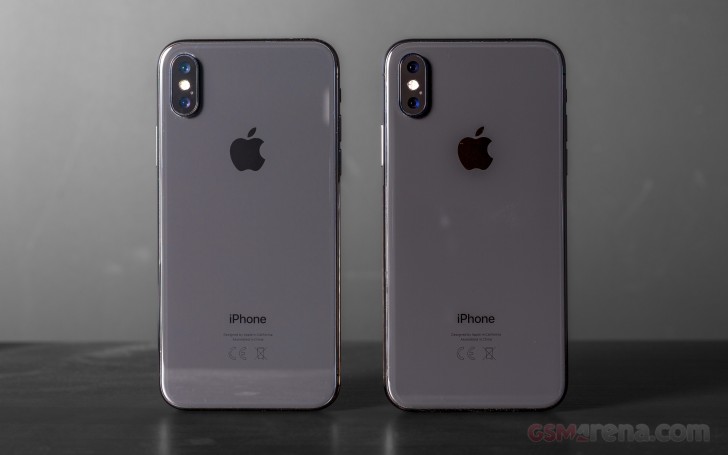 The glass-sandwich design is nothing unseen, that's true, but Apple did try to make it interesting again last year with the introduction of the stainless-steel frame. The iPhone XS has the same steel frame as the X with a glossy finish. Oddly, while we can't really measure slipperiness, we can still tell you that the frame is a bit more slippery on the Silver and Gold models, than it is on the Space Gray one. 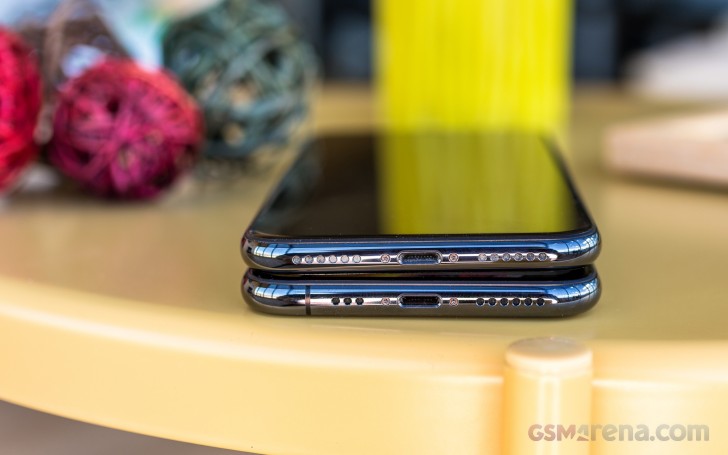 Apple likes to call the front and rear glass pieces 'the most durable glass ever in a smartphone.' If you wonder what that means, well, it's Gorilla Glass 6.

Fun fact, Apple has helped Corning more than ten years ago with a huge financial injection and has done this once again in 2017 giving the glass-maker $200 million. Currently, the Gorilla Glass 6 is the most durable glass on the planet (as far as shatter-proofing is concerned), and it's on both sides of the iPhone XS. We guess having helped Corning become what it is today have its benefits. 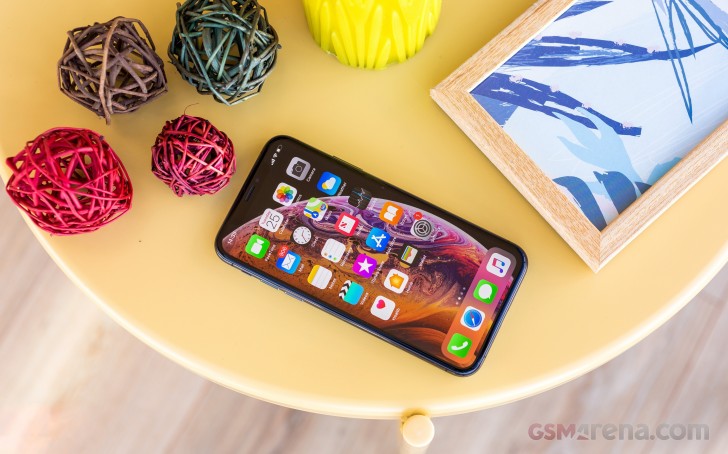 Anyway, the glasses on the iPhone XS are made by Corning, but Apple puts an additional oleophobic coating on them. It helps to keep fingerprints away and while the iPhone XS, as the iPhones before it, eventually gets covered in smudges too, it takes more time for that to happen and they are easier to clean.

There is another thing that's different but it's invisible to the naked eye - the sealing against dust and liquids. The iPhone XS is now IP68-rated for up to 2m dive for 30 mins, up from the previous IP67 rating for 1m deep water. Apple also said it has tested the iPhone XS in various conditions, including salt water that is not covered by the IP68 rating, and it did survive. 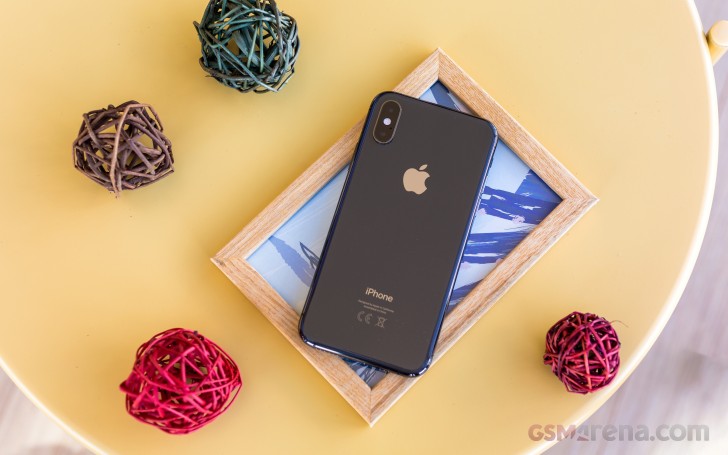 We want to stress that according to Apple's warranty terms, liquid damage of the device is not covered at all. But the phone clearly stands a higher chance of surviving after getting wet (be it salt water or other liquids). We have a dead iPhone 8 Plus in our office that didn't get so lucky on its first meeting with the salt water, but, maybe, if it were an XS instead, it might have.

Now, let's take a closer look around the iPhone XS.

The front is all ruled by the 5.8" notched AMOLED panel. It's the same unit introduced with the iPhone X, no improvements here - same resolution, HDR and Dolby Vision support, 120GHz touch-sensing. The mini-Kinect sensor in the notch is same as before, too, as is the 7MP f/2.2 front camera. 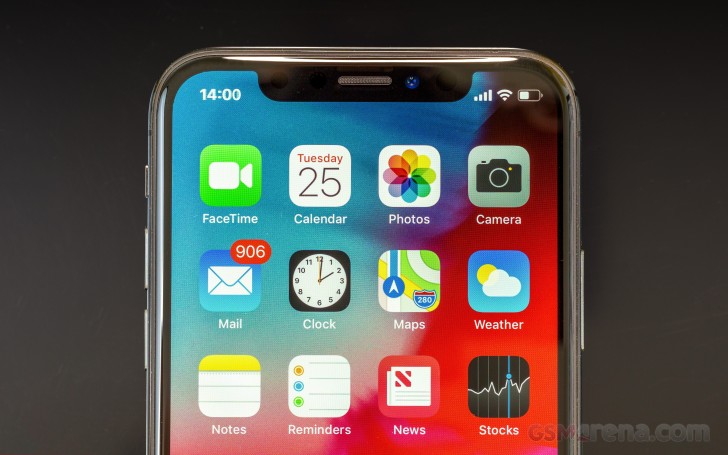 The earpiece once again doubles as a second speaker, but it's much louder on the iPhone XS. Apple introduced stereo speakers with the previous generation iPhones, but back then it just used the earpiece to create a stereo effect, while it remained rather inferior in loudness to the bottom speaker.

Well, no more. The front speaker is almost equal in loudness to the main one next to the Lightning port, and you can tell it right away. Everything sounds a bit louder, but the real difference is in the richer sound with deeper bass. Nice!

Apple finally introduced dual-SIM with the new iPhones, but unless you are in China, it won't work with two SIM cards. You'll find just one nano-SIM slot on the iPhone XS, it's just that this is augmented with an eSIM. So, if at least one of the carriers you intend to use supports the eSIM standard, then you can take advantage of the Dual SIM function. Otherwise, you're out of luck.

To use the eSIM you will activate your cellular plan with a QR code provided by your carrier. You can store more than one eSIM in your device, but can only use one at a time. 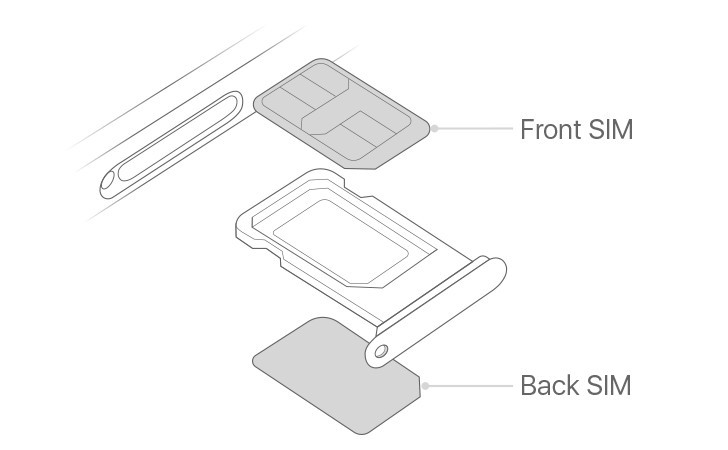 If you buy an iPhone XS Max in China, Hong Kong, or Macau, none of the above applies. Over there, Apple will provide a special SKU, one which comes with a proper Dual SIM setup. As you can see from the image above, the two cards will sit back to back in the slot.

Speaking of backs, the back of the iPhone XS looks exactly like what we saw on the iPhone X - there is a dual-camera hump in the corner and an Apple logo in the center. Beneath the glass, lies the wireless-charging coil - not that you can see it. 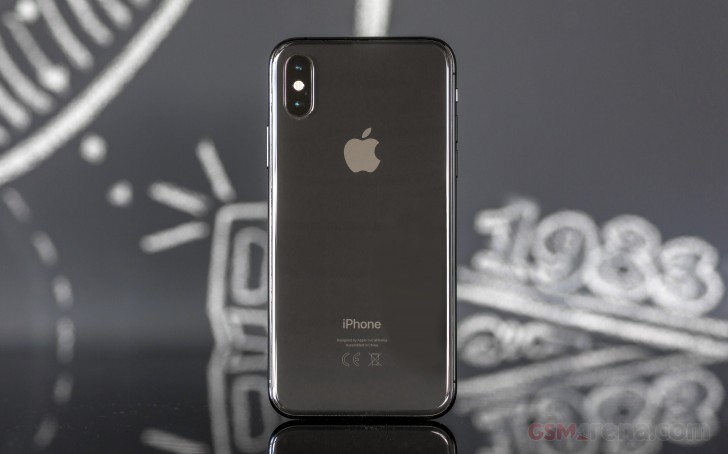 The camera setup has a new 12MP sensor for the primary camera with bigger pixels, while the 12MP telephoto snapper is the same. The quad-LED dual-tone flash is in-between.

Optical image stabilization is still available on both snappers. There is a new feature though - you can now capture stereo audio in your videos, which is something Apple should have enabled a long time ago. The company promises wider sound separation for the audio for better listening experience, and we'll explore this in the camera.

Handling the XS is a premium experience and while the phone is slippery alright, it's not the glass to blame. The glass surfaces here surprisingly have some nice anti-slip properties - better than most other dual-glass smartphones. A casse is always recommended, of course, because no matter how tough that Gorilla Glass 6 may be, it's still glass and it will probably break if you drop the phone. 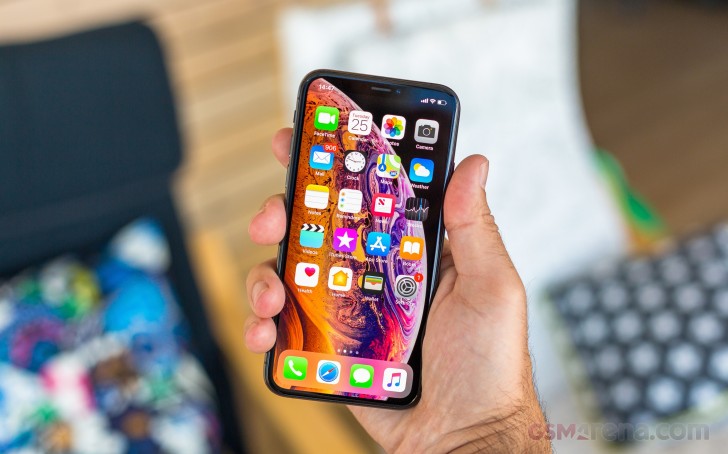 The iPhone XS is virtually the same as the iPhone X as far as the exterior is concerned. The camera hump at the back has moved about 1-2mm downwards though, which will anger all of you who thought you might get to keep using your X cases. Well, you can't, or at least they won't look good at the back, but that's so Apple, and you'd be a fool if you hoped for anything. 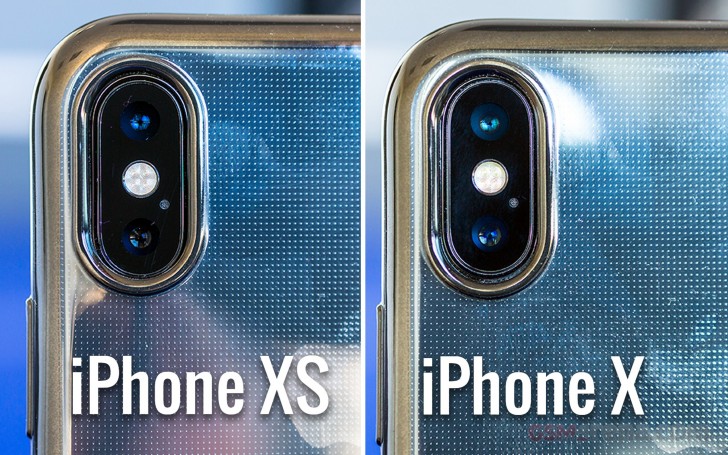 iPhone X or iPhone xs which one is better