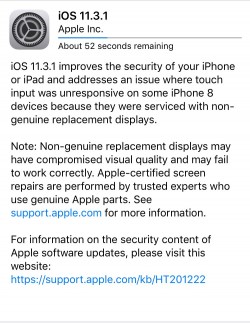 At the end of March Apple released iOS 11.3 into the wild following a lengthy development phase and many beta builds. Now, less than a month later, the company is already pushing the first minor update to that version of its mobile operating system.

iOS 11.3.1 doesn't come with any new features, just as its small number incrementation suggests. Instead, it is meant to fix a much-discussed bug that rendered touch input unresponsive on iPhone 8 units with non-genuine replacement screens.

This has cropped up in the past few weeks and turned into quite a scandal on the internet, hence Apple had to act quick. However, the company notes that "non-genuine replacement displays may have compromised visual quality and may fail to work correctly", and unsurprisingly advises you to go for genuine parts instead.

iOS 11.3.1 also improves the security of your iPhone or iPad, though the changelog doesn't go into more detail to describe exactly how.

Wonder what the new cheap iPad can do with the Apple Pencil?

The EU is investigating Apple's planned purchase of Shazam

Pfft LOL. So much cherry-picking garbage it's getting really old android fanboy. "Yes, a member of the herd defending the brand and their anti-competitive and greedy practices." Could very well say the same about you. Keep your bias opinio...

Improve security and repair unresponsive touch? Hell no, killed battery performance that's what it did.