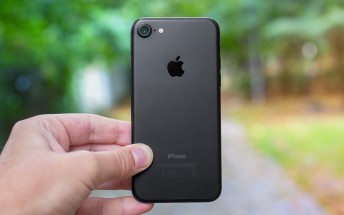 According to a new report from market research firm Strategy Analytics, Apple retained the top spot in the US smartphone market in Q3, although both shipments and market share were down.

While the shipments figure for the Cupertino-based company stood at 12 million (down from 13 million in the same quarter last year), market share was 30.4% (a drop of around 2%). 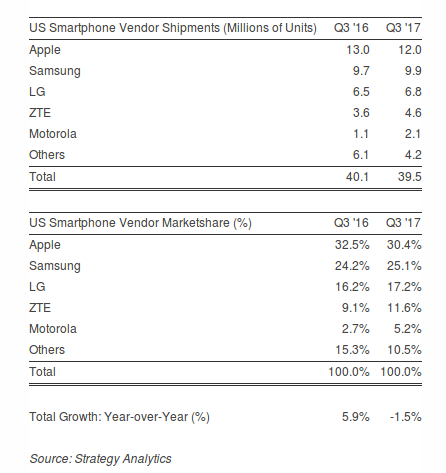 Samsung also retained the second spot, but both shipments and market share were up - from 9.7 to 9.9 million, and 24.2% to 25.1%, respectively. LG, ZTE, and Motorola also held their rankings to round up the top five.

Motorola deserves a special mention here, as the company almost doubled its shipments as well as market share in Q3. It has now captured over 5% of the US smartphone market.

"Motorolas recovery has been driven by expanded distribution with all top four US carriers, selling popular new models such as Moto Z2 Play," the report said.

America is now a dual-class society. Either you use high-end phones, or are poor and use a ZTE.

Sony isn't in this list. But remember Sony phones are most stable and durable ones.

Maybe this will inspire Moto to push a bit further. Moto should give us a Z3 Play with better cameras and a Snapdragon 660 with 6GB RAM