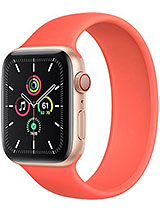 Anonymous, 11 Aug 2021All apple watches from the first generation have had an ole... moreit is entirely possible, many cheap smartwatches have LCD displays. but yeah it does have an OLED display

Anonymous, 30 Jul 2021Yeah, your're wrong. I can personally tell you that th... moreAll apple watches from the first generation have had an oled display, its not physically possible to use an lcd in such a tiny device.

Underratedtoxic, 29 Jun 2021first of all this watched dose not have a OLED display it a... moreYeah, your're wrong. I can personally tell you that the SE does have an OLED display.
Other than that, you're right. It's a great watch.

RavaN GaminG, 01 Jan 2021It has only 26 GB internal memory They lied the SE version... moreyes because watchOS totally doesn’t take up any storage 😐

Underratedtoxic, 29 Jun 2021first of all this watched dose not have a OLED display it a... morefirst of all, it’s “does” not “dose” and second, the watch SE does have an OLED display. please do your research next time, thank you :)

had to disconnect it from my iphone. Apple got notifications wrong. neither my phone nor my watch would notify me of calls nor text if they were charging together. missing calls and text at nigh just sucks! impossible to see ones HR during ones sleep as it divided at midnight. that is it won't show you HR b4 midnight the next day. IF I would try and sleep with it on. I would be regularly woke by random flashing and get notifications that it was time to stand at 2:50am. These are software problems that point to poor requirements flow down. The system is a total lemon.

Yesterday my watch se heated up suddenly while in my wrist . Battery drained from 94 to 58 in 30 mins . I was driving. I felt the heat on reaching the destination. I removed it and restarted both my watch and phone. After that it behaved normally. Anyone here experienced similar events?

xenprice, 23 Feb 2021This watch sucks in so many ways; 1) doesn't regularl... moresorry mate but i think you got lost between apple watch SE and other watch... because my SE watch do all the things that you talked about with no single issu
please try to read about how to use all the apps

RavaN GaminG, 01 Jan 2021It has only 26 GB internal memory They lied the SE version... morelol have you ever used a device?

This watch sucks in so many ways; 1) doesn't regularly measure HR 2) gives completely different exercise totals on identical walks (one 27 other 14) 3) suppresses all phone notifications while wearing the watch and not 4) never takes any HR measures while sleeping 5) just stopped giving stand reminders . the strange thing is, l this worked on the 3 version.

Podcasts and music are not downloading to the watch. So better go for cellular version if you are the one who wants a jogging companion

Apple really pulled a fast one with this product. It is really good for the money, and fits into the line-up perfectly. It will not have bleeding edge technology, but it is probably the best value smartwatch there is, especially with the tight integration with other Apple products. If you want a smartwatch, either get a series 4 or 5 refurbished, or get the Apple watch Se brand new for a similar price.

RavaN GaminG, 01 Jan 2021It has only 26 GB internal memory They lied the SE version... moreThe Apple watch SE does have 32GB of internal storage, but some is taken up by pre-installed software (watchOS 7.1) and all apps that have been downloaded onto the watch, as well as onboard photos and other downloads.

It has only 26 GB internal memory
They lied the SE version has 32gb rather then 26 gb.