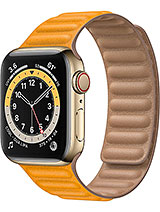 Mahammadtula, 24 Aug 2021Can i connect it with android that have NFC no you can’t. apple watches are for iphones only

Can i connect it with android that have NFC

Can i ans and talk with this watch?

Can i order this online?

KC01, 21 Jun 2021Hi, Can I use Apple Watch with my IPad(Wifi) or IPod(Wifi)?No, Apple Watches are only compatible with iPhones.

Hi,
Can I use Apple Watch with my IPad(Wifi) or IPod(Wifi)?

1. Yes, it is usable without an iPhone via Family Setup. However, an iPhone is still required to initially set the watch up via Family Setup, and the only watch capable of supporting this is the LTE model, with the watch getting its own phone number so that calls to other people can be made.

2. Yes, the watch can send messages to an emergency contact if the user takes a fall. After the watch senses that a user is immobile for about a minute, it will automatically call emergency services, and it will send out a message with the location of the user immediately after the call ends. These contacts are pulled directly from the Medical ID. With normal setup, you normally manage your Medical ID/emergency contacts on your iPhone, and one can assume the process would be similar for Family Setup. However, I would experiment with this before giving it to an older relative to make sure that emergency contacts are set up correctly.

3. It isn't specified anywhere on the product page itself, but the Apple Watch normally gets about 1-2 days of battery life in a single charge. My S4 would last me about a whole day, but battery life has likely improved since then.

4. In my own opinion, I would recommend it. The Apple Watch has some great health features like being able to take an ECG reading right from your wrist, the previously mentioned fall detection, a standalone Emergency SOS feature that can be easily triggered by holding the power button down and sliding to the right a la iOS, and taking a blood oxygen reading with the Series 6. For a specific model, I would get an aluminum Series 6 with LTE if you're concerned with having every health feature possible for the Apple Watch. If you're only worried about fall detection, however, an LTE Apple Watch SE should suffice.

A.D., 13 Mar 2021Hi everyone. I'm not an apple product user soni don... moreNo it's hard to understand about apple iOS and watch os so buy her a voice controlled assistant or buy other smartphone or Samsung watch alive or watch 1

Hi everyone. I'm not an apple product user soni don't know much about them but I'm planning to buy either watch 5 or 6 sim version for my grandmother who's alone during daytime. Can someone answer my question.

1. Is the watch usable without any phone, standalone?
2. Can the watch really send messages to emergency contact if the wearer fall?
3. How long is the battery life?
4. Is it recommended for old people?

I bought this, and despite the ludicrous price (to be expected, this is Apple) it's perfect! Just the feeling of being premium alone is a reason to get it.

$500 for a watch. No thanks. With that money, I'll buy an Xbox Series X (that's insale, not from scalpers) instead of spending it on a watch that does the same thing as a phone.

this watch is amazing..

I think that SE is better option than 6 for healthy, mid-age people. Because only two differnces are options of having Blood Oxygen app2, and ECG app3. Theese 2 apps are good only for people with hearth conditions.