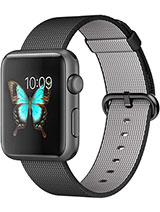 Anonymous, 09 Oct 2017Do you recommend buying the Series 1 42mm (which is basical... moreyes. My father has one (Watch Edition) and it works great. You need to charge it daily though, once a day.

Do you recommend buying the Series 1 42mm (which is basically a 1st gen with faster processor) for € 300 today? I have an iPhone 7 and I'm thinking about it.

Nice improvements with WatchOS 4 but the music app has both ups and downs, its now clearly tilted towards "dynamic playback" where the user is expected to interfere less with selection of songs, now the list is no longer shown when selecting a playlist, one has to tap once extra on a list symbol to see the actual playLIST. Seems the important thing was to change it, not to improve it.
Other than that loading times seem to be higher sometimes, and the workout app now requires extra taps to configure a workout, a pro for some but a con for me. Timer app has improved immensely, with a repeat button upon completion and finally seconds can be chosen, very helpful in cooking, like when half a minute both ways is the difference between too soggy and too crispy fries.
They removed the "cover with palm to return from app to watch face", i agree that feature wasnt optimal but i miss it some times. It now stays in apps by default.
App switcher has changed a lot and has an "all apps" button at the end of the list, but its not really better, just more 3D and probably more battery demanding.

Almost 2 and a half year since its introduction and still gets good prices on the second hand market and still does more than the newest models from the competitors. I have to admit though, the original software it came with was horrible but watchOS 3 took care of the stupid things it launched with. I really hope they dont try to force another Friends-function down our throats with OS 4, i hated the friends button, it was mega narcissistic.

Just paired my apple watch series 0 with iPhone 7 plus and I observe that it work faster compare when it is paired with my iPhone 6 plus....loving it more now...

Can make great deals on these used now, dont think that Series 1 is very superior, some apps actually start faster on the original AW, its mainly boot up time thats considerable slower on this one.

I got my apple watch last week since I cannot find any series 1 I just bought the first generation. After one week of use I can say that it is not slow using OS3.1 and battery life is good can last 1.5 days with moderate to high usage and 2 days if light use I'm happy with it and will use it for at least a year before upgrading and pass it over to my son...I just both Spigen protector to preserve the beauty of I love my apple watch.

I have had my iWatch the day it came out I have so far gone swimming above 1 meter, I shower with it all the time(i change my songs in the shower), been in a major rain storm, taken my kids on waterslides, work out with it all the time and have gone kayaking ! it is waterproof but you need to still be cautious, the ratings allow UP TO 1 meter submerged. the downfall is while the watch is wet it's kinda difficult to use as the touch sensors don't recognize where you are touching, but just make sure there is not a lot of water on the screen when you use it. it's personally your choice!!! Friends of mine have the watch and didn't believe me until they saw it with their own eyes and now they trust me. It's 100% your choice clearly. You spent your hard earned money on this toy so choose how you want to use it. All I am saying is you're safe to have your watch in a bit of water !... enjoy it how you want ... I LOVE MINE !!!

Using Apple Watch 42mm since a week now and me fallen in love with this watch .. For me it's really useful ....

Have been wearing and using my 42mm Space Gray Sport for 5 months now. Can confirm that under my use, it comfortably lasts a day and a half:

Settings:
*brightness at 2/3
*80% alert volume
*haptic enabled
*feature-compromising power-savers are not in effect

AnonD-485887, 08 Jan 2016it last for almost 24h with normal usage and GPS is working... moreSame here. Been using the watch for a month now and I found out that it can last for more than 24 hours, especially if you turn off the heart monitor and turn on "reduced motion".

AnonD-485887, 08 Jan 2016Using it for more than 2 months, dropped it couple of time ... moreMe too, not only drops, but several times smashes in doors, tables, etc, not a single scratch or defect. It surely surpassed my expectations in terms of durability.

Highlander1978, 02 Nov 2015a built-in gps would drain the battery for 3 h. Instead, it... moreit last for almost 24h with normal usage and GPS is working all the time

Jxeyer, 22 Dec 2015Very brittle glass... once you drop it its sure to break. O... moreUsing it for more than 2 months, dropped it couple of time still scratch less, you should first see it experienced it after that comment some thing stupid.