Canalys published its quarterly on the smartwatch market. Q2 of 2018 saw great Apple Watch performance with 3.5 million shipped units, but it didn't manage to match the market growth rate and lost some share as a result. 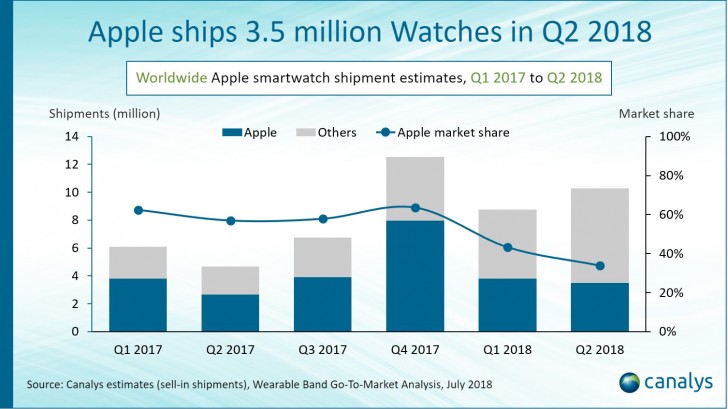 The research shows that in Q2 2018, users around the world bought 10 million smart watches in total and compared to last year's Q2, which meant that despite Apple's growth of 30%, its share shrunk from 43% to 34%.

Apple's growth is primarily fueled by the LTE model's popularity in Asia, which sold 250,000 units - 60% of all Asian Apple Watch sales. The Cupertino-based company was able to strike deals with plenty Asian carriers to offer its LTE variant - Japan, Singapore, Thailand, India, South Korea and even Australia, which really boosted its exposure.

Apple patents a way to wirelessly transfer power between devices

Shipped also mean sold to distributors who will resale it to us the consumers. The money has been exchanged in hand. As if shipping thing is for free.