Apple is going to introduce three new iPhone models this fall at its traditional September event, according to a new report. The three handsets will be direct successors to last year's iPhone XS, XS Max, and XR, and they will have the same screen technologies and resolutions as their predecessors. As previously rumored, Apple may only move to an AMOLED panel for its most affordable smartphone in 2020.

Speaking of things that aren't changing - the Lightning port will stay for another round, the report says, opting not to join the latest iPad Pros in USB-C land. The three new models will all be powered by the Apple A13 SoC, codenamed Cebu. 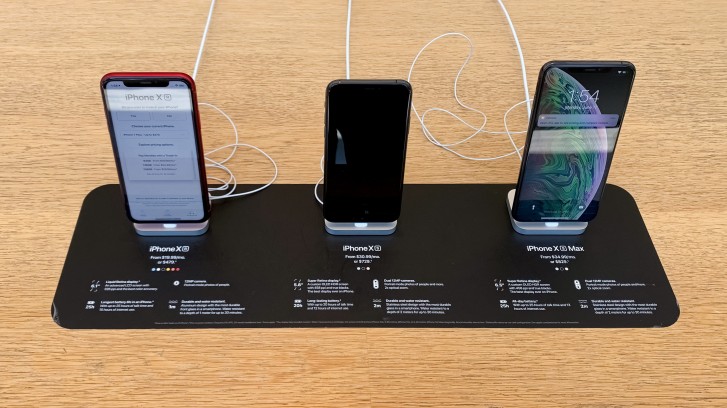 The new handsets will come with a new type of Taptic Engine, known by the codename "leap haptics". It's unclear what new types of features this should enable, but its existence might have something to do with the fact that the 2019 iPhones will get rid of 3D Touch. A lot of rumors have previously said that, and with support for Haptic Touch in iOS 13 (which requires a long press) that's pretty much been inadvertently confirmed by the company itself.

The iPhone XS and XS Max successors will have three cameras on the rear, adding an ultra wide-angle shooter alongside the normal wide and telephoto lenses of their predecessors, as previously reported.

Aside from giving you the option to shoot with a wider field-of-view, the wide-angle camera will be used for a new feature called Smart Frame. When you take a photo or record a video with the normal shooter, the ultra-wide will grab an image too, thus allowing you, for a limited period of time afterwards, to adjust the framing or perform automatic perspective and crop corrections.

The front-facing camera on the iPhone 11 models will be upgraded, allowing for 120fps slo-mo video capture.

I think I need popcorn.

Apple is really stubborn with their proprietary lightning port, even after all proven benefits of USB-C. And you wonder "Why?" - answer is simple... to make money. Why do you think they have non removable battery from the very beginning? Wh...

I totally agree with this statement. Everything from lacking hardware to high prices and now ugly design aswell...