ARM has unveiled the new Cortex-A77 CPU and the new Mali-G77 GPU. The GPU is a bigger deal as it leaves the Bifrost architecture behind and moves to Valhall. The CPU is an upgraded version of the A76 core designed for mature 7nm processes.

Bifrost was announced back in 2016 with the G71 core. Valhall is a major redesign, which promises 30% better energy efficiency, 30% better performance density. Also a 60% improvement to machine learning tasks.

What this means that late 2019 and 2020 chipsets that use the G77 core can expect an impressive 40% increase in performance, despite gaining little from the manufacturing process (the jump from early 7nm to mature 7nm is relatively small compared to a brand new node). 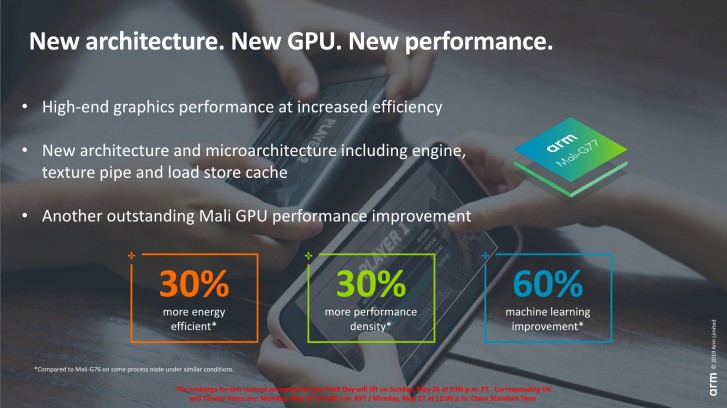 This was achieved by moving from a 4- or 8-wide execution model to 16-wide (for comparison, Nvidia GPUs are 32-wide, AMD’s are 64-wide). These are called “warps”, which are similar to a thread on the CPU, so a single G77 core should be able to do up to twice as much work as a G76 core (it’s more complicated than that, of course, our point is to expect GPU designs with fewer cores as those are now more powerful).

ARM designed new texture units that have double the throughput of the units in the previous design.

The Cortex-A77 builds on the A76 design and promises a 20% performance improvement at the same clock speed.

The new core adds a fourth ALU, which increases the integer execution speed by up to 50%. It can do simple operations (add/subtract) in a single cycle and it has been improved to do complex operations (multiply) in 2-3 cycles (the old core needed 4 cycles).

ARM has also improved the accuracy of the branch predictor and added a second predictor port, which will help feed data to the new ALU as quickly as possible. A second AES pipeline has been added to speed up encryption and decryption. 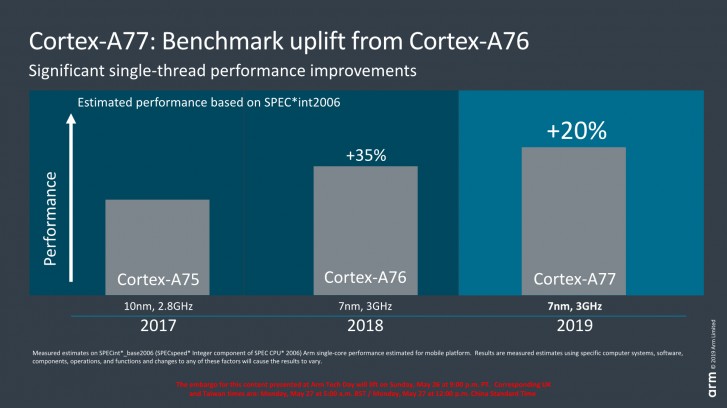 In summary, chipset designs that rely on ARM designs for graphics (Exynos, Kirin and Helio) will see big gains. Qualcomm, which only uses the CPU will get a small bump and will see competing chipset designs start catching up to its powerful Adreno GPUs.

we need power efficiency cortex a-56.

dont worry, there are lots of job in china.. they are too kind to us, should ban apple and stop working and trading all us major products let them suffer the pain as well

Irrelevant to the point*