You don’t see many gaming tablets, especially ones that run Windows. Asus’ ROG division wasn’t happy with that, so it tapped one of Intel’s latest 12th gen processor and a mid-range Nvidia GPU to create “the world’s most powerful gaming tablet”, as the company describes it.

The Asus ROG Flow Z13 is a highly portable device – its display measures 13.4” and the slate’s body is a mere 12mm (0.47”) thick. It’s easy to stash in your backpack and have it always ready to play. And while it’s quite petite, it packs a lot of firepower.

Asus chose the Intel Core i9-12900H processor that was officially announced earlier today. It has 6 performance cores and 8 efficient cores, plus an integrated Intel Xe GPU with 96 execution units. There are options with an i7-12700H and an i5-12500H as well.

Tthe real graphics power comes from the Nvidia RTX 3050 Ti from last year. It features 2,560 CUDA cores and 4 GB of GDDR6 video memory (128 bit bus). The Core i9 has a TDP of 45W, the 3050 Ti goes up to 40W, so that’s a lot of heat. However, Asus says that since the components are laid out vertically (i.e. they are not in the bottom like in a laptop), the cooling system is able to blow a lot of air over them. If you don't need that much graphics power, you can pick a slate with an RTX 3050 or even one that relies solely on the Intel GPU (this one is suitable for use with an eGPU dock).

The tablet is equipped with a Thunderbolt 4 port, which also does DisplayPort 1.4 and supports USB Power Delivery charging at up to 100W (the battery has 56 WHr capacity). This port can output video from the Intel GPU. There is another USB-C port (3.2 Gen 2), which outputs video from the Nvidia GPU and can also do PD charging. There is one USB-A 2.0 port (you can use it to plug in a mouse), an HDMI 2.0 port and a 3.5 mm headphone jack. There is also a UHS-II microSD card reader.

Additionally, the Thunderbolt port can be used to connect the Flow Z13 tablet to an XG Mobile dock for extra GPU power and connectivity. The original dock is configured with an Nvidia RTX 3080, but this year Asus also introduced a version with an AMD Radeon RX 6850M XT. The dock expands the connectivity with additional DisplayPort, HDMI, USB and Ethernet ports. 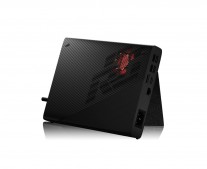 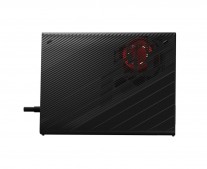 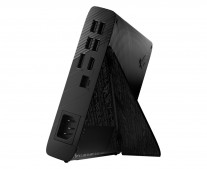 You can pick between two versions of the Z13 slate. The default is a 1080p display with 120 Hz refresh rate, the other is a 4K option with 60 Hz refresh rate – it depends on whether you prefer high quality graphics or fast-paced action. Both are 16:10 IPS LCDs with Gorilla Glass protection, Adaptive Sync, Dolby Vision support and color accuracy validated by Pantone.

The tablet has a built-in kickstand that can be opened up to 170º to hold the display at a convenient angle. Also, the retail package includes a Screen Cover Keyboard, for some laptop-like gameplay. You could, of course, connect proper peripherals – a mouse, a game controller, your pick.

There are no controllers that attach to the keyboard yet, but chances are either Asus or a third-party maker will create such controllers. Then you can use the Z13 as a Switch on steroids and don’t forget that since this runs Windows, you have full access to your game libraries (Steam, Epic, etc.).

It’s not quite clear yet how much the Asus ROG Flow Z13 will cost, but it will not be cheap. By the way, Asus also refreshed the Flow X13 laptop.

When will asus launch this in India

Can we play Android games like Clash of Clans here?