ASUS announced the ROG Phone 6 and ROG Phone 6 Pro back in July with all of the usual fanfare. Both phones use Qualcomm's top-tier Snapdragon 8+ Gen 1 chipset and are jam-packed with the usual slew of advanced cooling and control options we've come to expect from ASUS gaming phones. That announcement was followed by a long period of silence, which had us convinced that the Taiwanese giant had just decided to simplify its lineup this year and forego an "Ultimate" edition.

Fortunately for all the mobile gaming pros and fanatics out there, that's not the case. The silence was soon broken by rumors of a MediaTek-powered variant of the ROG Phone 6, which turned out to be true. Enter the ROG Phone 6D and 6D Ultimate. The "D" in the name stands for "Dimensity," and both phones are based on the MediaTek Dimensity 9000+ top-dog chipset. A bold and unusual move on ASUS' part.

Not only is ASUS taking up a MediaTek chip this time around, but it is also clearly staking quite a bit on it by giving it the "Ultimate" moniker. Today we have the ROG Phone 6D Ultimate in for review. Just like its historical predecessors, the Ultimate edition is largely based on the vanilla design, but with some small additions here and there as a sort of "icing on the cake". This year the Ultimate doesn't get extra inputs but rather a new AeroActive Portal - a motorized air duct that gives the AeroActive Cooler 6 attachment a channel to directly cool the innards of the device.

It, along with the potential cooling and performance benefits it provides to the Dimensity 9000+ chipset, will be the focal point of this review. We will be referring back to our extensive ROG Phone 6 Pro review for any bits we've already covered regarding hardware or software. 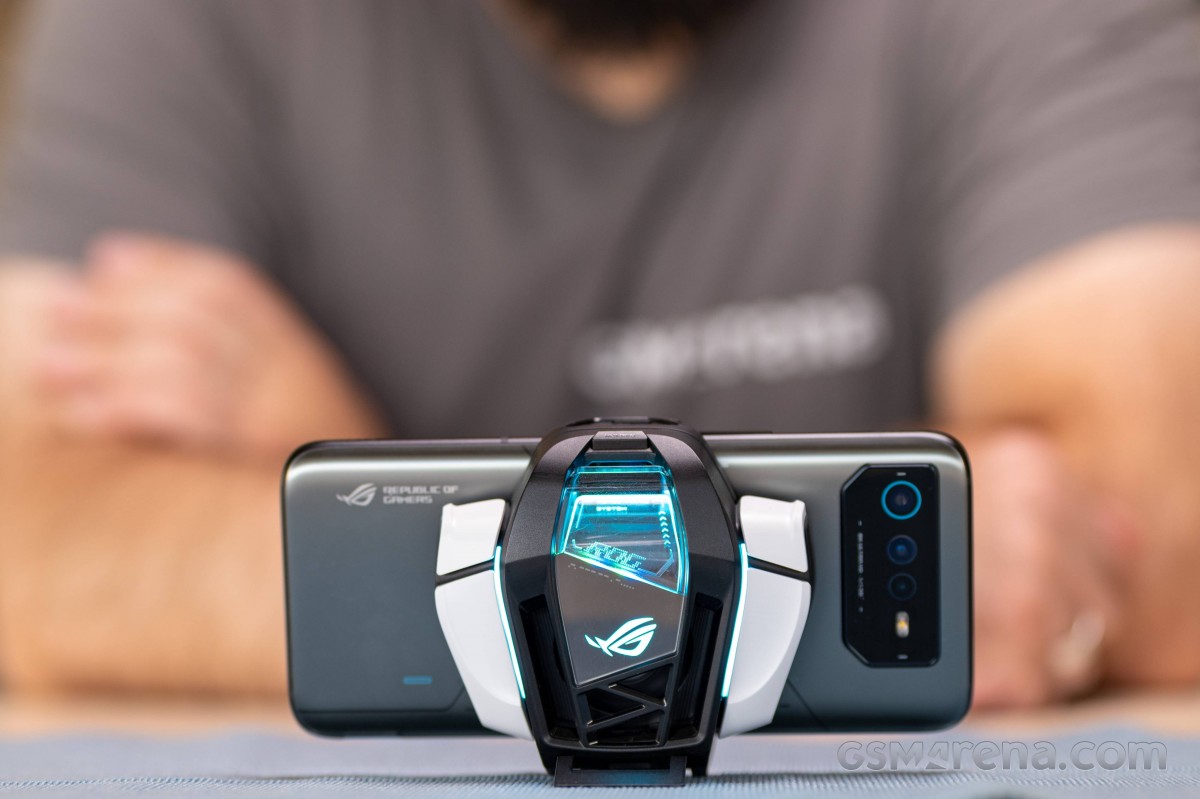 Just to clear up some potential confusion points, this is the review of the ROG Phone 6D Ultimate, which currently sits at the top of the ROG Phone 6 lineup. It has a Dimensity 9000+ chipset, just like the vanilla ROG Phone 6D, but unlike the ROG Phone 6 and 6 Pro, which use the Qualcomm Snapdragon 8+ Gen 1. The ROG Phone 6D Ultimate also exclusively features the new AeroActive Portal and, unlike the other phones in the lineup, always comes bundled with an AeroActive Cooler 6 in the box. Hope that clears some points up, and speaking of the cooler accessory, before we move on to performance, thermals, battery, charging and camera tests, let's take a glance at the retail package.

ROG Phones have traditionally made a statement with their retail boxes. ASUS decided to start toning down that particular aspect of the experience a while back, and currently, most of the phones in the ROG Phone 6 lineup just come in regular two-piece boxes. Not the 6D Ultimate, though. It ships in a hexagonal prism box which is quite eye-catchy. 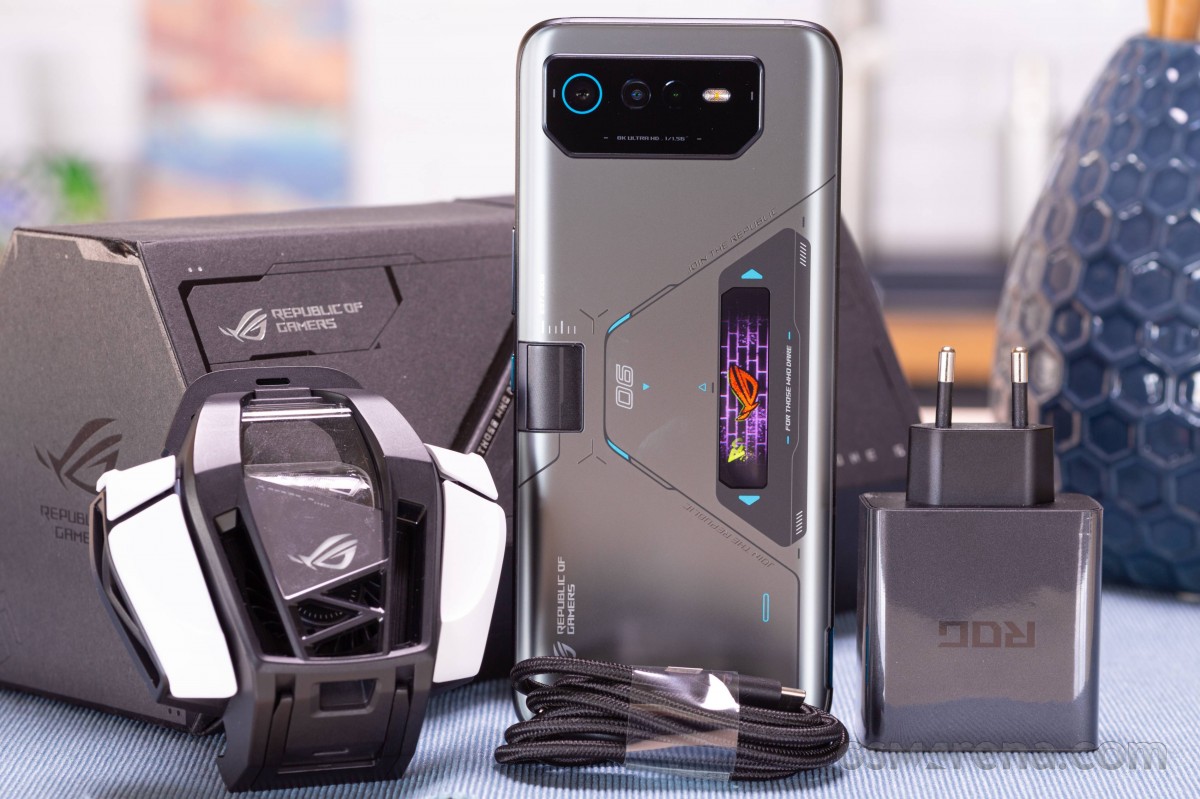 The box employs a two-piece slide-out construction that also feels futuristic and a bit like unveiling a weapon. There is definitely enough material to keep the phone safe during shipping, which is great to see. And most of the space is surprisingly well used on the inside of the box.

Once you pay up for an Ultimate edition, Asus delivers all of the trimmings. The cradle slides out to reveal the bottom compartment, charger, and cable. The HyperCharge charger is an extremely compact and surprisingly light unit with up to 65W of Power Delivery output over a Type-C port. Asus relies on entirely standard PD + PPS to do its fast charging, which is a real treat to see. It is rated for 5V/9V/12V/15V @ up to 3A, 20V @ up to 3.25A and PPS 3.3-11V@3A, 3.3-21V@3.25A for a max of 65W. This versatile charger can easily be used to even power some modern laptops. You also get a nice black braided USB Type-C to Type-C cable in the box.

There is also a case included with our unit, which according to Asus, should be part of the retail package. Check with your local store for details on that, though. This is not the Asus AeroActive case that came with our ROG Phone 6 Pro unit, but rather the much thinner case with more and bigger holes that ships with the AeroActive Cooler 6 if you purchase that separately. 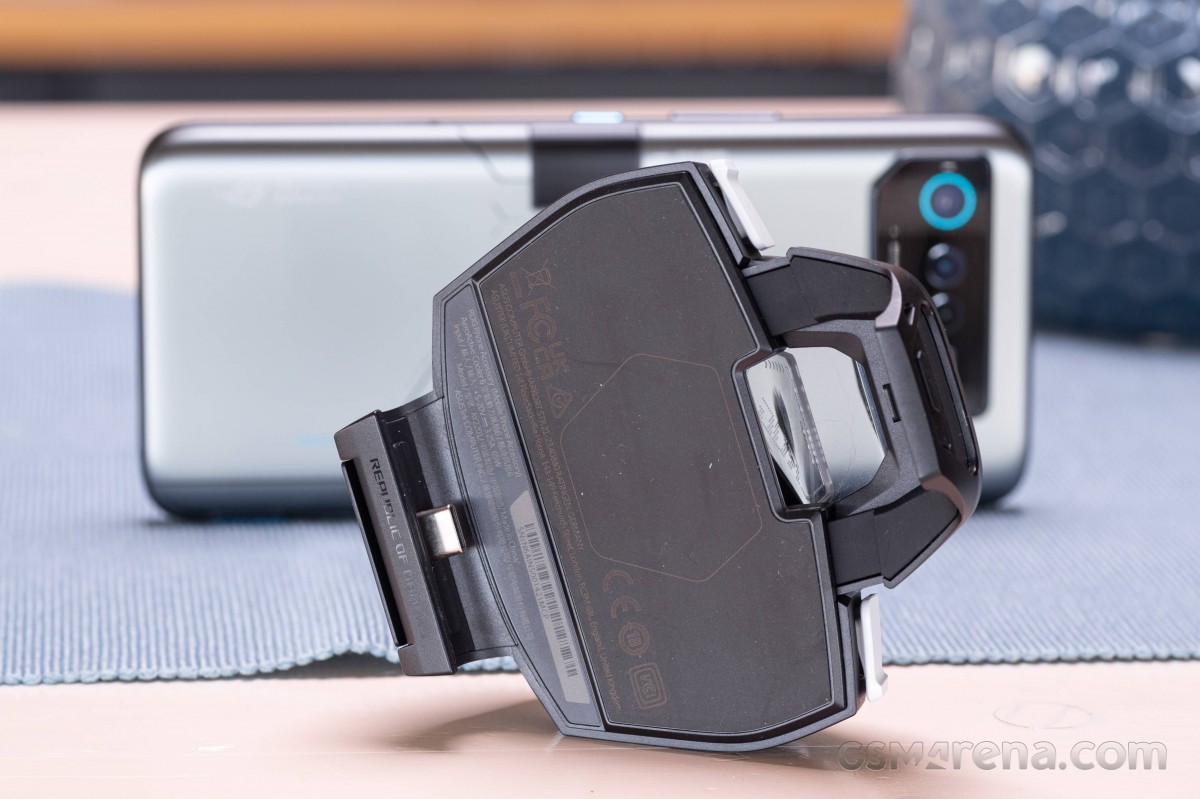 And last but definitely not least, the AeroActive Cooler 6 comes bundled with every ROG Phone 6D Ultimate unit. Also in the box - is a SIM ejector tool, some leaflets and an oddly-shaped ROG card that is meant to be used as part of an ASUS AR setup experience.

Yeah, if phone companies aren't allowing the option of an SD Slot standard, I'd at least want 1TB internal storage with these same specs. Will definitely be getting the next release if they keep the 3.5 MM jack and ridiculously good battery...

Just found out that phones. Similar to ROG phone 6 failed the bend test. I would rather wait for the 2023 ROG phone. Which may have the following specs: 1. Snapdragon 8 gen 2. 2. Better Resolution. 3. 1TB or 2TB internal storage. Otherwise...

I won't trust cloud storage, especially when you go to places with little to no Internet.