The Black Shark 5 Pro runs JOYUI 13 out of the box, which is based on MIUI 13 and runs on top of the latest Android 12. Like the Poco launcher, which is ever so slightly altered MIUI for Poco phones, JoyUI is an adapted version for Black Shark phones. From what we gathered, only a couple of themes, wallpapers, and gaming-related features set it apart from the original MIUI. 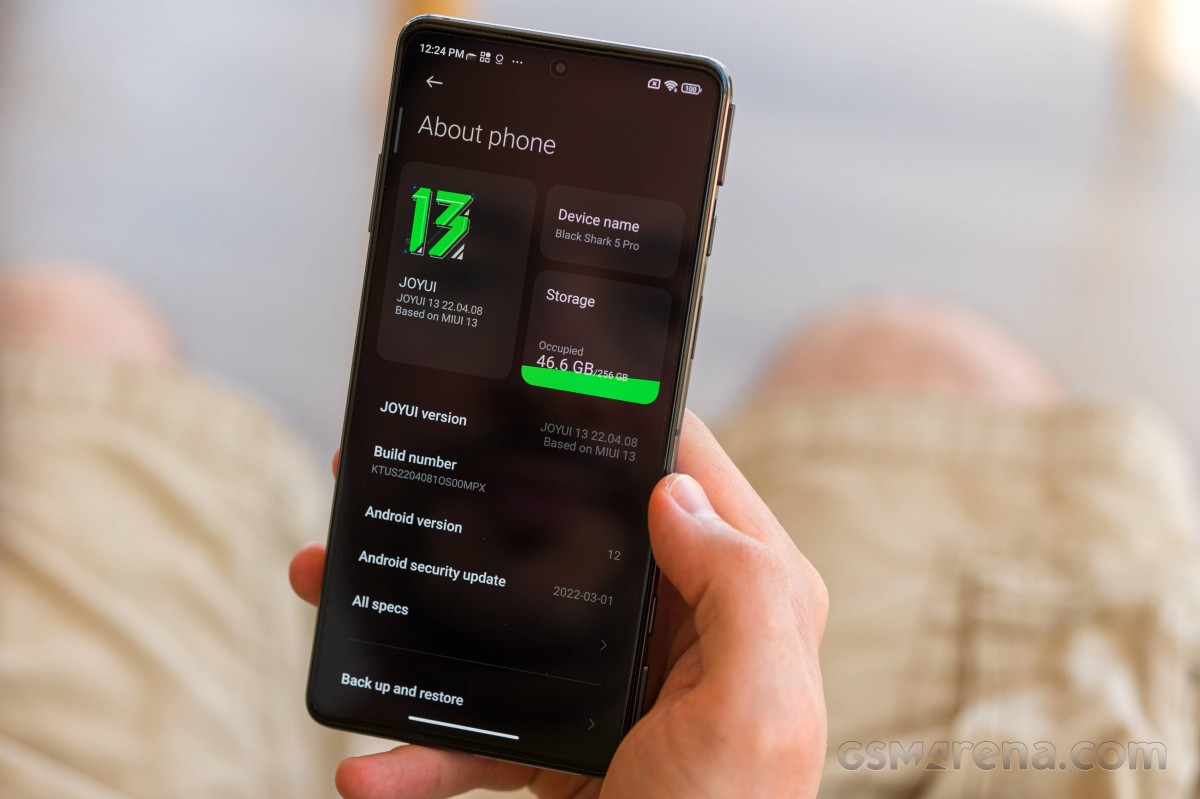 The home screen, lock screen, app drawer and recent apps are all pretty familiar and generally lifted from MIUI. The app drawer is set as a default option on the Black Shark phones instead of the simplified home screen arrangement. The notification shade and quick toggles are extensively customizable.

Swiping down from the home screen near the left edge of the display will bring down the notification cards and stacks. This, in turn, can be customized further by switching over to MIUI-style notification cards instead of the default Android ones. Swiping near the right edge will bring down the so-called Control Center - four highlighted toggles for the Wi-Fi, Bluetooth, cellular and flashlight, while the rest are the usual toggles that can be rearranged. There's the brightness slider too. The highlighted toggles have a small triangle icon in the lower-right corner. Tapping on it will show a context menu allowing you to manage your connections on the fly without having to open up the settings menu.

Speaking of the display, on top of the usual options, you get a Sunlight mode that boosts the brightness even further when the brightness control is set to manual mode. Quite useful for people who do not like automatic adjustment. The Anti-flicker mode also prevents the screen from flickering at lower brightness levels.

Unlike the rest of Android phones, including the other MIUI branches, the battery menu is tucked away in the Performance manager section. In addition to the standard Battery menu, you have a Process manager, Network assistant and Endurance optimization assistant at your disposal. The names of the features are pretty self-explanatory, but they also give you some nerd stats such as CPU and RAM usage in real-time, network connection quality and detailed battery usage stats.

Xiaomi has rearranged these menus slightly since the last time we checked, and the available charging modes are now notably easier to find. There are two of them. Speed flash filling gives you the maximum 120W peak charging mode, which can make the phone a bit toasty. Constant temperature charging lowers the charging cap a bit. More important still, it learns from your charging habits to preserve battery health in the long run. After all, you don't really need those 120W pumping juice into the battery if you are doing overnight charging. Supposedly, it would stop charging at some point and wait until the last few minutes before you wake up to fill up the remaining battery charge. 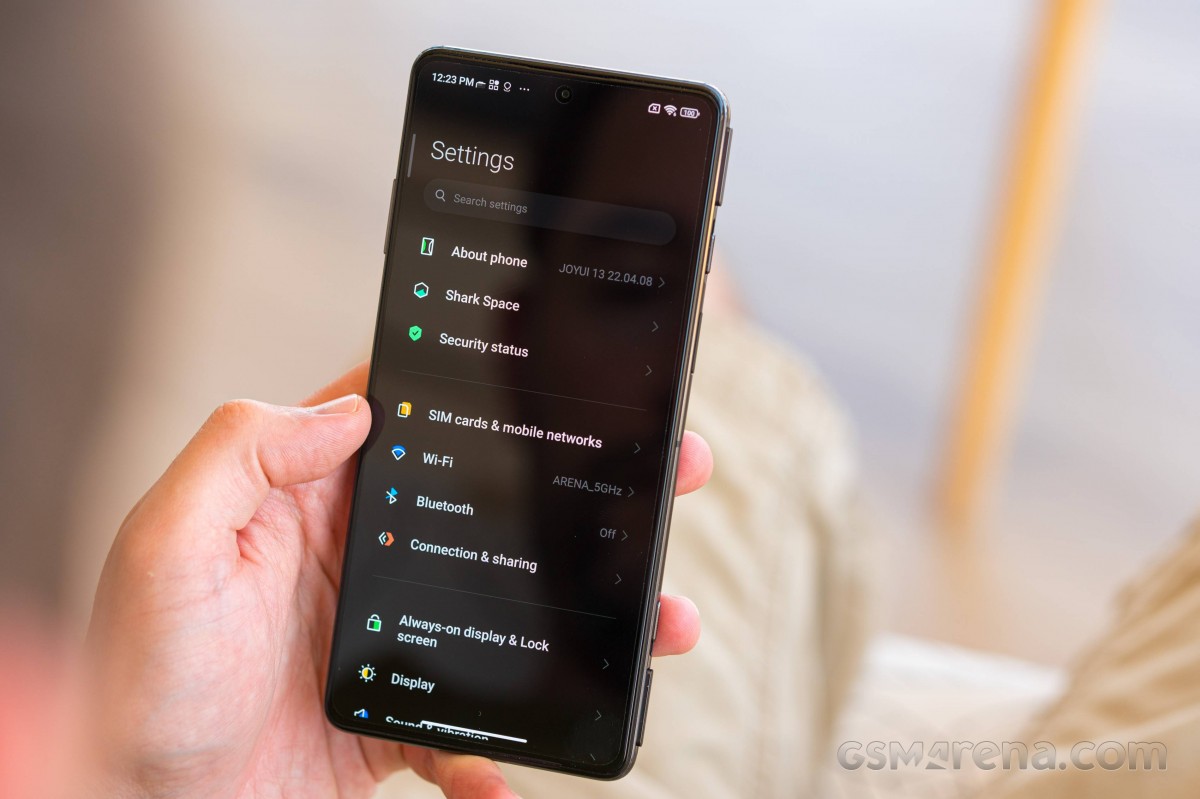 The one-handed mode is a mixed bag since the gesture requires swiping across the navigation buttons to activate it, and that works okay only if you are not using full-screen gestures.

Unlike last year's model, the Black Shark 5 Pro supposedly has a dedicated RGB bit on the back panel, which should be handling the light effects. For some reason, however, we never actually managed to make it shine on our review unit.

Lastly, we have the so-called Magic window. This feature seems to be getting pretty popular on custom UIs and what it does is offer quick access to certain apps or tasks just by sliding out a small panel over other apps or menus. You can move it around the edges to your liking.

Like its predecessors, the Black Shark 5 Pro has a handful of gaming-specific software features to set it apart from your regular Xiaomi or Poco phones. The so-called Shark Space is in the center of it all. There's no dedicated physical button to start the Shark Space, so you have to either open the app itself or press and hold both shoulder triggers. 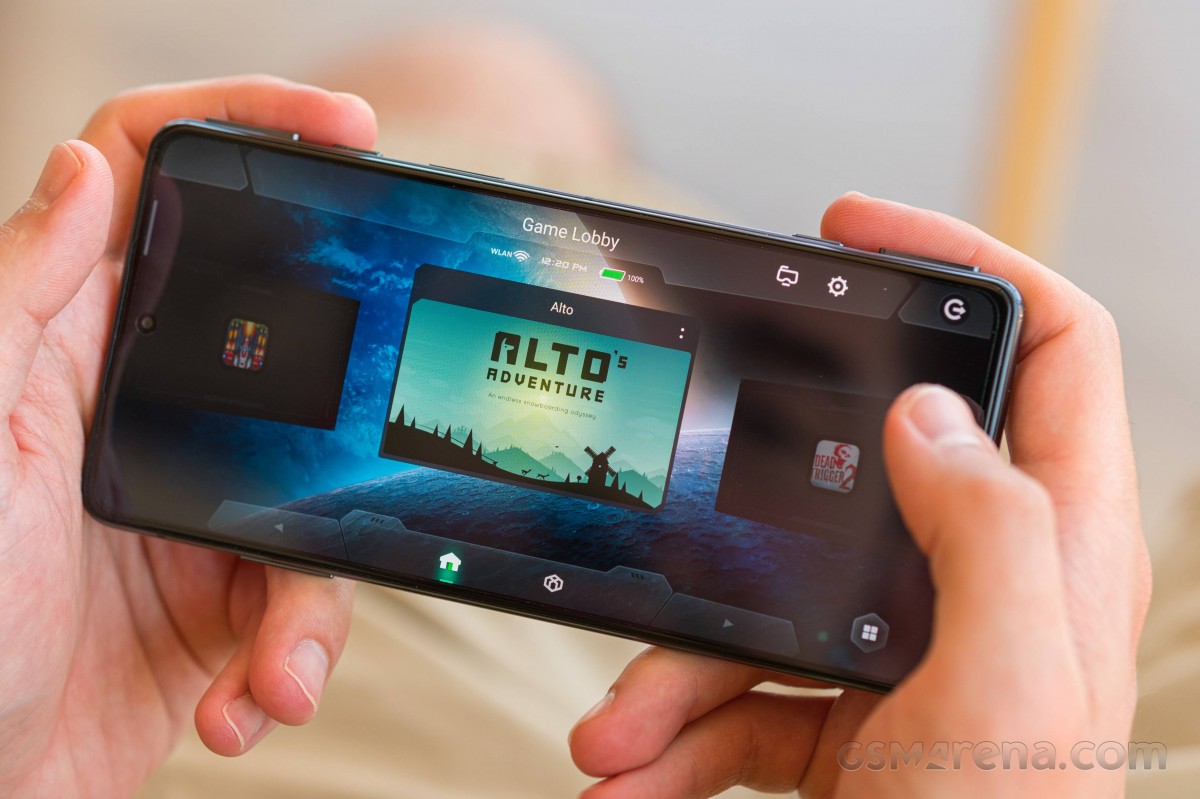 The app allows you to manage your game collection, sync your accessories to the handset and set global settings such as locking the brightness level, toggling on the mistouch prevention feature, rejecting an incoming call automatically, muting notifications, etc.

Beyond that, there is the actual in-game overlay which is called Game assistant and is summoned by swiping from the corners of the display. Enabling or disabling some of the corner gestures in landscape and portrait mode is also possible.

In the Game assistant, you'll find all sorts of useful things, from performance stats to all kinds of anti-interruption toggles, macros and a toggle for the nifty bypass charging mode, which simply powers the phone from your charger without putting strain on the battery. In case you are in a game with a buddy, using the loudspeakers can sometimes interfere with the call quality, meaning you won't be able to hear the other side. The Game voice mono feature aims to solve this issue by temporarily disabling the top speaker so you can hear your friend's voice clearly.

We already mentioned that the pop-up shoulder buttons are one of the Black Shark 5 Pro highlights. In fact, they have become somewhat of a mainstay within the Black Shark family. While competitors go for capacitive controls, which have their advantages, physical buttons will always win out in our book when it comes to gaming. They provide better tactile feedback, control and possibly, a faster response time.

But the triggers are useful outside of gaming too. You can assign different tasks to each trigger - the bottom one, for example, launches the elusive one-handed mode by default. You can even set them up to work with the screen off.

Unsurprisingly, the Black Shark 5 Pro also features an extensive control mapping software layer. Beyond the obvious steps of mapping the pop-up triggers to an an-screen control, the system also supports the mapping of motion gestures to on-screen actions.

Also making a return - Magic Press, which allows you to set a custom on-screen button pressure threshold from seven different levels. Xiaomi markets this interesting feature as a way to get "precise movement" in some games. We can see how that can be a thing, but we can also see ourselves using this feature mostly to prevent accidental touches and inputs.

Haptics also feel great on the Black Shark 5 Pro, and along with the physical triggers, the large dedicated speakers, and the slew of software features, the excellent haptics here round off what is an already excellent gaming experience.

What are your graphic settings on Genshin?