BlackBerry Curve 9360 review: Up and about

The BlackBerry Curve 9360 performance in our audio quality test is best described as just below average. The smartphone isn't among the loudest we have seen, nor has it got the cleanest output, but it's not terrible either.

With no resistance applied to the line-out (i.e. the active external amplifier) the Curve 9360 did quite decently. Its signal-to-noise, dynamic range and stereo crosstalk reading were really good and the frequency response was quite good for the most part. Intermodulation distortion was a quite a bit higher than average for that scenario, though.

And when you plug in a pair of headphones quite serious issues arise. The stereo crosstalk goes to levels we have rarely seen before and even more distortion creeps in. 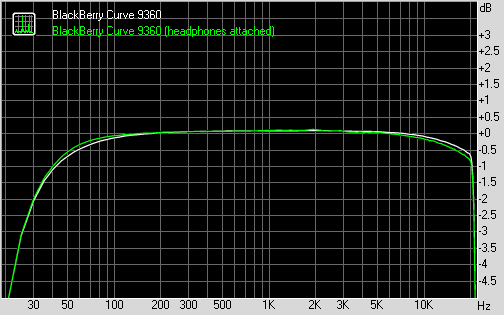 With so many better options out there, the Curve 9360 is an easy one to overlook if video-watching is a priority. It would be a mistake. The Curve 9360 does a really great job, so you might want to tick that box on your wish list.

The landscape screen is a good start, while the video player itself isn’t bad either. Its styling might not be too impressive, but the functionality is mostly there.

There are the usual playback controls when you hit a key or tap on the screen, along with a dedicated fit/zoom to screen button.

The Curve 9360 video player is said to support DivX, XviD, H.264/MPEG-4 and WMV videos up to 720p resolution. It did manage to play all of the DivX files we threw at it, WMV, MOV and MP4 files up to 720p were no problem either, but the XviD videos didn’t go that easy. Some of the files were OK, while others where just incompatible. It seems it's a bit rate or audio thing, but we won't count on that XviD support much.

The general performance here is decent, which is probably more than most BlackBerry customers will ever need.

The image gallery hasn't changed since the OS 6, so it should be familiar to all BlackBerry users already.

Images can be browsed in grid mode or viewed as a standard list. There’s search by name here too, but we’re not the type that remembers the names of our image files, so we won’t count that as an extra.

Photos can only be browsed in landscape mode or you can manually rotate them. Unfortunately the Curve 9360 has no built-in accelerometer to provide automatic rotation.

You can skip to the next photo without returning to the gallery – you just flick your finger over the trackpad and you are done.

Checking an image’s properties, applying zoom, as well as starting a slide show, are all a menu key click away. Setting one of your images as a homescreen wallpaper is available too.

Picture browsing is pretty fast and so are zooming and panning. It would have been nice to use the volume rocker as a zoom lever, but the gallery is generally pretty good.

Which is the best blackberry mobile??

Does it need any blackberry data plan separately?? Does it supports whats app??