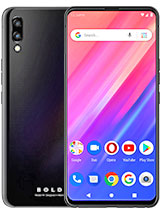 dont buy the BOLD N1, 25 Oct 2021I have been a loyal BLU customer for over a decade. On the... moreWe bought two of these to use with Cricket for our kids, they have been great phones and I have no complaints about the fingerprint reader or pop up camera they work flawlessly even after my kids having them for two years!

I have been a loyal BLU customer for over a decade. On the whole the products have been exceptional The BOLD N1 is junk. No facial recognition, a terrible echo, and the finger print software only woks half the time and works in slow motion. DO NOT BUY THIS PHONE. Shame on you Sammy, there is no business model that justifies selling junk. Tom Heany

Kizzy, 30 Apr 2021I just came across your post about the Android 10 update fo... moreAfter Upgraded to Android 10, I noticed new UI, which is feature plus and background wallpaper that are new when after waking it up.

Selfie 'pop-up' CAM is functioning flawlessly as before - no issue experience unlike others after upgrade.

Not running much apps on this but I feel my N1 is more snappier than before.

Kizzy, 30 Apr 2021I just came across your post about the Android 10 update fo... moreYeah it's not uncommon, the popup camera is malfunctioning. Does not stay open. Avoid the update unless they come up with a patch fix

nicos, 25 Apr 2021I just got my Android 10 upgrade yest - with Feb.5,2021 sec... moreI just came across your post about the Android 10 update for the Bold N1. I just got the notification for the same update and version number you referenced. Haven't installed it as of yet. Have you noticed any issues or bug with it? Also have you checked your pop-up selfie camera to ensure it is functioning? A reviewer on YouTube said the 10 update caused issues with the camera (wouldn't function, built-in camera app would crash). Not sure if that was just an isolated case though.

Dusty, 24 Nov 2020Just received my Android 10 update last night. I was surpr... moreI just got my Android 10 upgrade yest - with Feb.5,2021 security patch. That took a long while, I was thinking of mothballing this N1, took a chance on the update and there it is.

Trying the new features of v.10 and like it so far - seems faster and more fluid interaction.

Does this mean - I wont be getting anymore updates from BOLD on this N1 ?

no , the unit is not damaged. Blu as a company is damaged. Our Bold N1 was kept perfectly in a case , screen protector, never dropped , ever. It started overheating a lot. we did a factory reset, ran it with min. apps for a week or two, kept overheating. finally the charging port got loose, would no longer charge. Only used supplied cord. Overheating caused port to break solder I would assume. Our G9 Pro also started having the widely known screen freeze issue after android 10 update. These phone are absolute junk. Enjoy your ghetto phone. I won't be coming back to the Ghetto for the good cheap food anymore. not worth it.

And also we contacted Blu on both phones prior to warranty expiration (2 months out) and they sent me an RMA return. I responded with all required info 3 times. They then ignored all communications with us and ran us out of our warranty. I called over and over again. Said they would email us, never did. This company works on the this premise...Make sure our customers have to buy a new disposable Blu phone every year. Thats it.

Jlaw, 30 Apr 2020You obviously damaged the unit no, a lot of people have had the same issues with Bold N1. It is caused by a faulty battery or charging system. the phone overheats and eventually breaks the solder on the charging port.

IdkWhatHappenedHelp, 28 Nov 2020My phone won't turn on no matter what I do. The phone ... moreI think it would be a battery issue because it cant just be a dirty charging port because you said wireless charging was not working either.

My phone won't turn on no matter what I do. The phone was working just fine last night I don't know what happened it won't turn on. I have tried to use different plugs and outlets, cleaning the charger and my phone, wireless charging, charging through a pc, looking up videos and reviews and nearly anything I could've thought of and nothing has worked. I can't even factory reset it. The only thing that appears is a low battery sign with a lightning bolt in the middle and a plug underneath saying it needs to be charged, even when a charger is in it and every now and then it will show up. I get the buzz that I get whenever I plug the phone in and it starts to charge but it doesn't show progress being made. I don't know what happened, and help would be appreciated i don't know if it's a battery problem, a software problem (I don't think it updated to android 10 yet but I don't know it may have and I can't check), or if I did something to mess it up. I've dropped it a few times but I have the case and the gorilla glass which has some scratches but the phone is and always has been fine, there's no problems underneath the gorilla glass. This is the first time this has happened to me since I got the phone, which was more than a year ago.

Dusty, 24 Nov 2020Just received my Android 10 update last night. I was surpr... moreDoes it make the phone better? Because I got the update and my phone is so laggy because of it

Just received my Android 10 update last night. I was surprised when it wanted to update.

I've had this phone for several months so far. The charging port broke a few weeks ago so I can't charge it with a cable anymore. The phone never had any unusual hits and this has never happened to any other phone I've had before.
The fast charging feature was pretty good, but it only works with the included charger. I have several other chargers including QC3 type but they wouldn't fast charge the phone. Fortunately, it has decent wireless charging otherwise it would be useless.
The battery is okay so far. All in all very good value for price. You could buy four or five of these for one galaxy /iphone

Buzz, 11 Jul 2020I realize the phone is no longer available but this phone i... moreYeah, your phone must be a dud. I have one, and easily lasts through a full day. definitely on stand by it would.

I realize the phone is no longer available but this phone is so bad I don't know what to do. I have had the phone for six months. In the last month, my battery will no longer last more than 4-5 hours on standy, OTG is gone, notifications arrive hours late, downloading from the Google Play store takes days, trying to use bluetooth freezes the phone, wifi won't automatically reconnect, etc. I could go on. All Blu support says is send in the phone and they will look at the phone, flash it, and hope to send it back in two weeks. They hinted that the last security patch may have screwed up my phone. This is my fourth Blu phone and my last.

Anonymous, 17 May 2020It's supposedly designed in Miami also usa lol