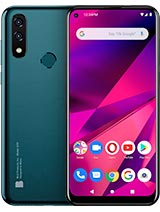 DON NOT BUY !! The phone lasted about a month and the power button stopped working then a few weeks later the back of the phone started to smoke a s sparks came out. Please save your money

phonyphone, 17 Mar 2021GSMArena claims the battery is removable. Someone in the co... moreMine from Best Buy has removable battery.

GSMArena claims the battery is removable. Someone in the comments said it is not removable. Which is the correct information?

Almost a year and loving this Blu G70 phone and nice CASE included with it. LTE phone calls are solid. Timely firmware updates from Blu. Absence of headphone jack is an engineered thing, alleged for better battery life, which is ALL DAY and then some! No bloatware. Wifi and USB tethering is solid. This phone is GSM, does not work with Verizon nor Sprint.

Jase, 26 Jan 2020This most definitely looks like a really amazing budget pho... moreIt’s available in Guyana

They supply the adapter!

Edward, 30 Jun 2020Buy a adapter on Amazon for $8. It will work.most adapters break super easy and the splitters that let you plug in headphones and charge at the same time dont charge. maybe the more expensive splitters will charge but not the $8 ones.

jj, 16 May 2020Something happened with this Blu G70 model. Headphone jack ... moreI bought the phone because it said it had a 3.5" headphone jack. But it doesn't.

Edward, 30 Jun 2020Buy a adapter on Amazon for $8. It will work.TY. Connectivity, internet and QUALITY of LTE phone calls are second to none. It is a LTE phone and that is what you get. Not those UMTS calls.

It's a nice phone, but back camera and speakers are really awful. Good for a low budget phone, however I recommend you save a buck more and buy a better one.

Something happened with this Blu G70 model. Headphone jack slot is sealed.

Not a bad phone

Kirah, 24 Apr 2020I have not bought it yet but does it take good pictures an ... moreYes it takes decent photos and decent video recording with anti shake (eis)