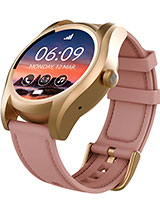 Adul Al Salami Kebab, 20 Nov 2019It has a tiny battery even for a watch... :> My phone completely died. Phone overheats but does not charge. So now i have smartwatch paper-weight. 😕

what's up with the battery? I have to power it up 2 times per day. Anyone else have the same problem?

GSMArena? This is a watch not a "feature phone"

4MB memory? No thanks, I'm better off with a digital watch thank you very much.

Lucky2BHere, 24 May 2018I've had a few Blu phones and, no, they are not the update ... moreUnfortunately I've had this watch for about a week and absolutely hate it but I keep it thinking and hoping that updates will come texting is not something people can do easily on this watch and as far as Bluetooth headphones no I have only been able to get it to connect to one device at one time it will not allow me to connect it to multiple devices such as my phone and wireless headphones

The one feature I wanted, was the feature in the ads for the watch. The callers photo and number. The phone number linked easily, but I could never get the photo to transfer. I contacted BLU, who told me that that feature doesn’t work on that watch. Yet the Ad picture shows it as a feature. False Advertising. I downgraded the review to 2 stars. Other than that “ Lie “ the watch is great ..

AnonD-272032, 22 Mar 2018Wow! That's a lot of people who cant read. You do realize t... moreI agree. I have it and it's amazing. It can double as a phone with a Sim card, but it's a phone on par with something from 2001 minus Snake. You aren't supposed to use it to Snapchat or Facebook. Best option is to use the watch hooked up to Bluetooth and make it an extension of your phone, you know, the way smart watches are intended to be used.

Richyboycaldo, 24 May 2018$50 bucks is not bad. What firmware will it use? Android Wear? Android Wear cannot fit into 4MB of storage.

I've had a few Blu phones and, no, they are not the update kings...by a long shot. But the phones were cheap and they lasted at least two seasons. Not real bad. The watch at $50, though, could be a steal.

Deal maker/breaker for me: I'd like to know if you can use bluetooth headsets for calls from the phone. Don't see that anywhere in the promo stuff. It obviously can use speaker, but that is not how most phones are used most of the time for very clear reasons. Anyone know?

$50 bucks is not bad. What firmware will it use? Android Wear?

Don't buy anything by Blu, they promise updates and do not deliver. Trust me I own two Blu phones that are sitting on a shelf still waiting for the promised nougat upgrade. Meanwhile, Oreo 8.1 is highly stable and nougat is becoming a relic itself.

As far as the watch you are much better off buying the Samsung Gear S2, which may be from 2016. But it still blows this generic 2G watch away and it's constantly being updated with new software. With the most recent software upgrade the battery in my Gear S2 will last over 48 hours without charging.

4mb of ram that is too low.

Too much to pay for a watch with 4 MB RAM. Looks are good but, the specs are not great, I mean not suitable for the level of today's technology.

Wow! That's a lot of people who cant read. You do realize that it is a watch with possible calling capabilities and not a phone right? Do you really want a phone jack and loud speaker on it? Honestly how loud do you thing that loud speaker will be in a crowd?

Mehn that's a lot of NOs!