China overtook the US to become the biggest smartphone market in 2013, and now India is taking away second place from it. Canalys reported today that total smartphone shipments in India reached 40 million units in Q3, 46.5% of them accounted to Samsung and Xiaomi. 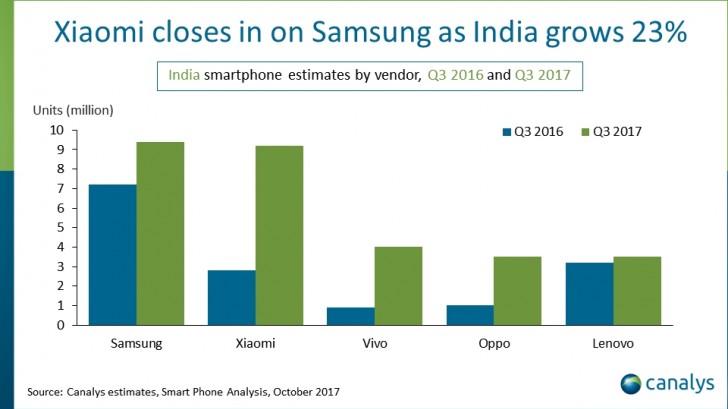 Samsung is the leader with 9.4 million shipped smartphones, while after a massive 290% increase in shipments YoY, Xiaomi is in second place with 9.2 million units. The Chinese company focuses on the low-end devices since it struggles in the mid-range, Canalys points out.

Samsung, Oppo, and vivo are stronger in the midfield (between INR15,000 and INR20,000 or $230-$310), but Xiaomi’s go-to-market innovations might allow it to overtake the Korean manufacturer within a couple of quarters, said analyst Rushabh Doshi.

Apple is missing on the chart, despite doubling shipments in Q3. Analysts say the unimpressive number is due to the low-end smartphone orientation of the Indian market.

Shipments are expected to keep growing due to "low smartphone penetration and the explosion of LTE", so the US is unlikely to be able to return to the second position.

I did not say i'm tech support. That's just eew. I'm an engineer. Real engineer that's doing real engineering work and i'm going to canada next year just like any other fellow indians that migrate because of this sh8 country. But majority of our gra...

Never said it will overtake the US. But it will grow considerably. Take the example of the game cricket. England discovered the game 100+ years before. India was not even a country then. But India now beats England in pretty much every game played at...